That was the scene in Virginia last night. Here is a bit more from the plane.

From the airplane window, Romney's last rally of the night in VA. http://t.co/DBbIOfnq And today? Crowds formed hours in advance, and up to 10,000 are expected in Fairfax later today.

[email protected]: Check out this line waiting for Gov. Romney to speak. We are LIVE at noon at Lynchburg airport. pic.twitter.com/ahD96e8s 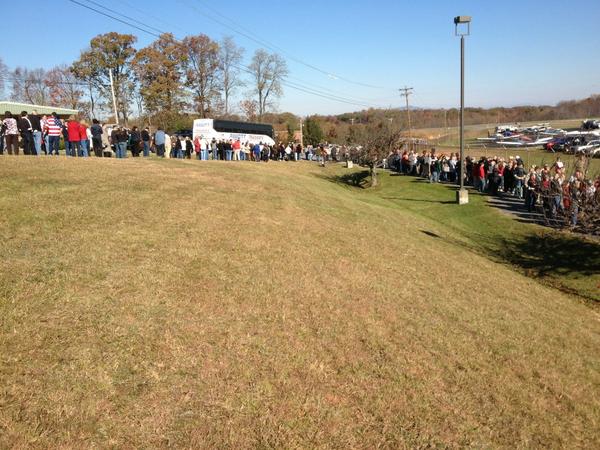 Line waiting to get into #Romney event at Lynchburg Airport. pic.twitter.com/Rm586cob 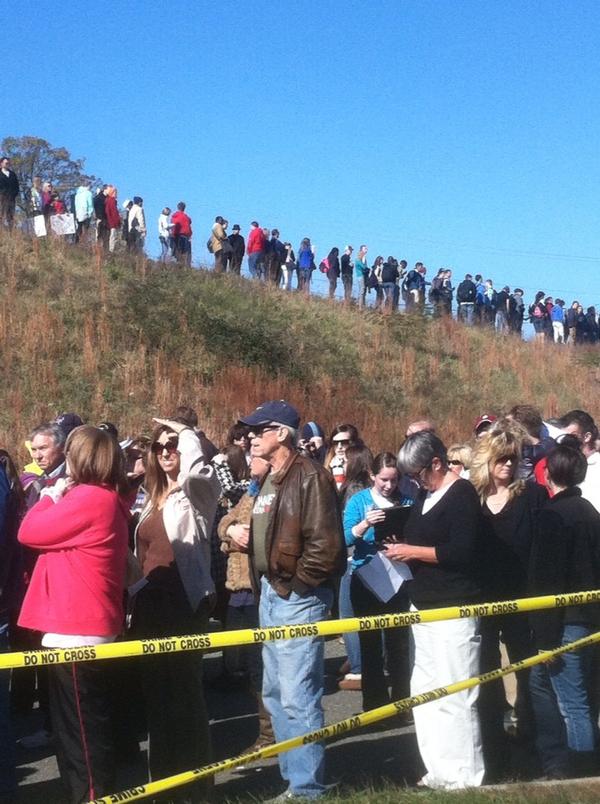 These great kids are fired up and ready to go!

As are the rest of the supporters in the huge and enthusiastic crowd.

Gov holding on the plane in Virginia, waiting to b introduced by @GovernorVA pic.twitter.com/xGoSMJOs 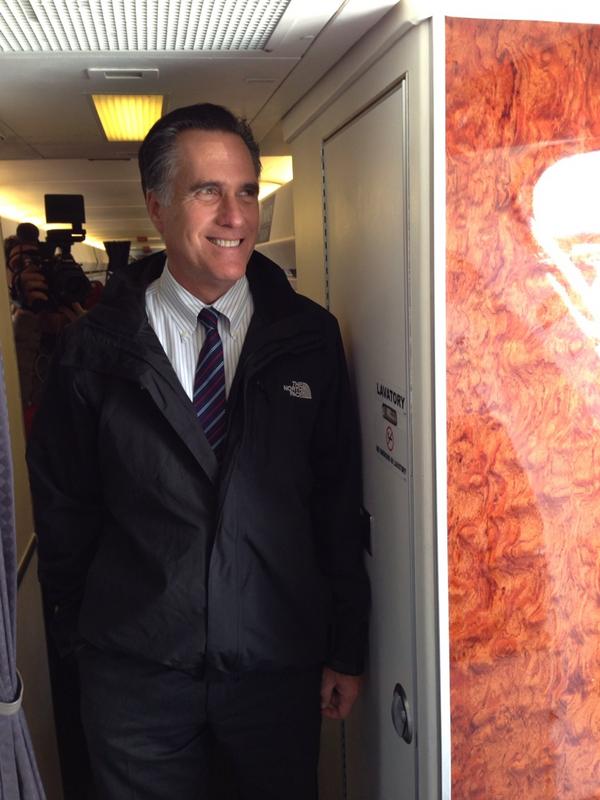 Beautiful day in Lynchburg, Virginia. Virginia is ready for Real Change on Day One. #RomneyRyan2012 pic.twitter.com/UcIm3pIx 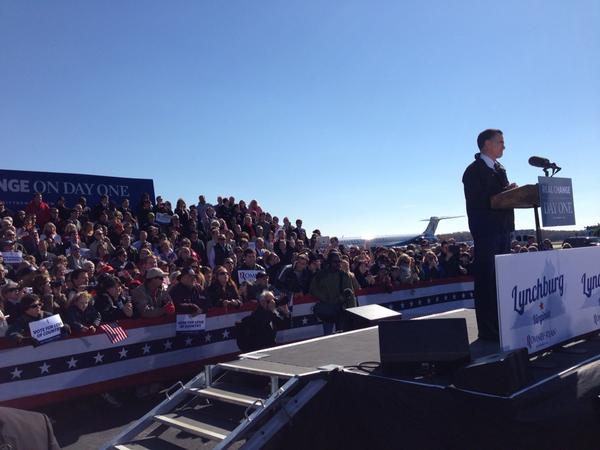 I won't just represent one party, I will represent One Nation-Romney, Lynchburg; contrasting Obama calling for revenge pic.twitter.com/gD0Nt2Sa 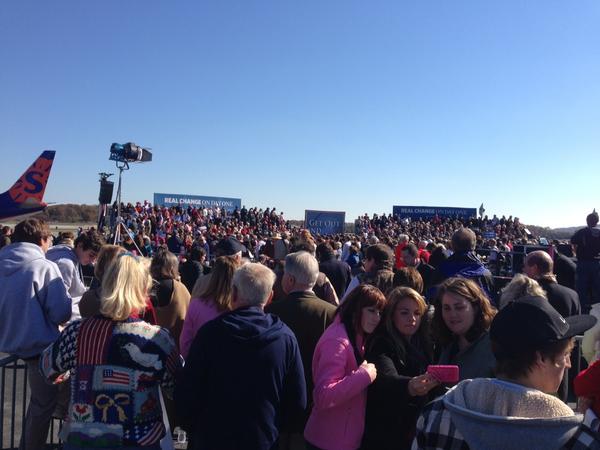 Romney asks the crowd in Lynchburg, VA to vote for change: "Help us win this."

Yes, you can, Virginia! 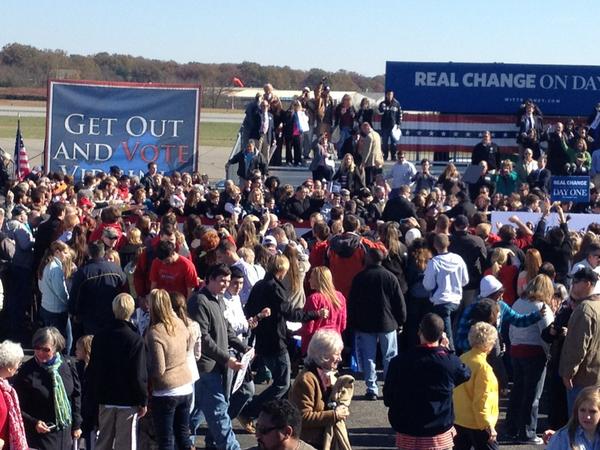 The crowd is already showing itself to be massive. They had to move to a larger venue!

Am in Fairfax, VA for Romney rally. Long lines, volunteers say people have been queuing for 3 hours #enthusiasm

Headed to cover the Romney/Ryan rally in Fairfax, VA doors open now for a 3pm start. Lines long to get in. Will tweet pics, update!

Still waiting to get in to #Romney rally in Fairfax. Waiting an 1.25 hr, 45 min to start, no entrance in sight #tcot pic.twitter.com/AsdbkYEl

Been standing in line at Fairfax Romney Rally for over 1 hour still can't even see Patriot Center. #tcot #ROMNEYRYAN pic.twitter.com/k0wsmsYh

@AniesRight sounds like more then the 800 that Biden got at his rally. Down with Obama/Biden

Heh. Biden was given the big, old “Dear John” letter at his rally in Va., today: A whopping 800 showed up.

Man this place is packed! Not sure we will get in! Fairfax County very critical for both President Obama and Gov. Romney! #election2012

If these crowds are any indication, this is prescient.

This is happening… #tcot #romneyryan2012 http://t.co/giSBku2c

Twitchy will update with more on-scene reports from the Fairfax rally.

@megynkelly on line 2 mile long wait to get into #Romney rally Patriot Center Fairfax with my 6yr old daughter!

@ali The Romney event in Fairfax is packed. My boyfriend can't get in! The arena holds 10k.

The crowd is definitely fired up:

I am at the Romney rally in Fairfax Va. So many people here the patriot center is full. Here we go!

Not getting in the #Romney Fairfax rally…in line over 2.5 hours…almost to front but Patriot Center hit capacity. @TwitchyTeam #tcot

Thousand still outside Romney's rally in Fairfax, VA. Fire marshal closed the doors. One woman just begged me to help her in.

Even those who weren’t able to get into the Patriot Center are still thrilled to be a part of Mittmentum:

Thousands of folks standing outside the Patriot Center in Fairfax, VA. Too full to let em in. Crowd going wild as #Romney motorcade passes.

Kids are getting in on the excitement, too:

Laying the groundwork for 2028, at the Romney rally in Fairfax, VA pic.twitter.com/NnwhHAI8 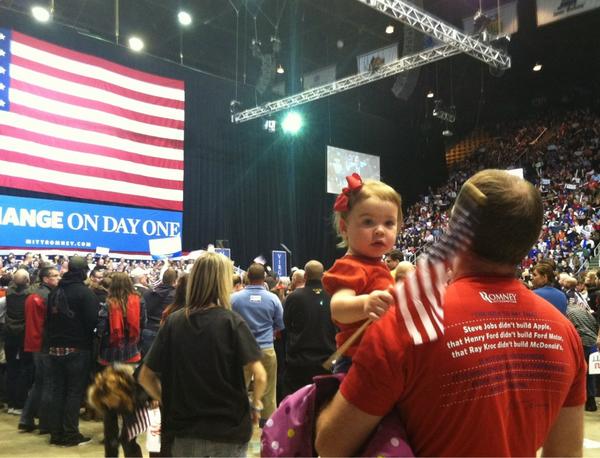 Ann Romney asks the Fairfax, VA crowd: "Are we going to be neighbors soon?"

Ann Romney asking the people of fairfax if they're excited about being neighbor soon gave me goosebumps. #RomneyRyan2012 ????????

WOW Fairfax, VA is ROCKING for Romney right now as he speaks!!!

Romney to Fairfax crowd: I'm looking around to see if it was the Beatles or something that brought you, but looks like its the campaign.

@seanhannity @glennbeck At Romney rally in Fairfax VA! What do the pools show? pic.twitter.com/pMDrXbwY 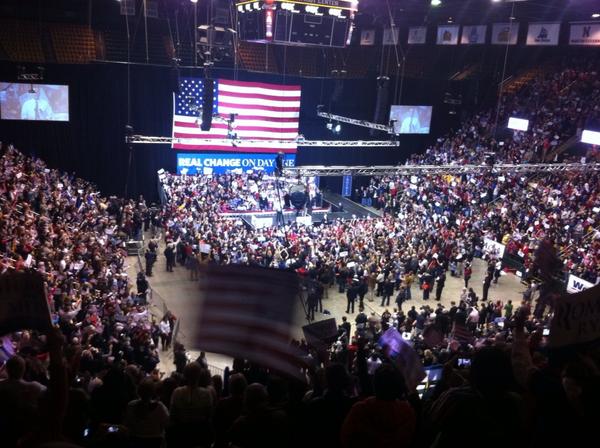 "If you wanna feel the energy, come right in this room…" Mitt Romney GMU, Fairfax VA

We can feel it from here. Wow!

The crowd at Romney's Fairfax rally is so loud, almost deafening cheers, that @kevinmaddendc is wearing ear plugs.

A friend shared this pic from the Romney rally in Fairfax, VA… Filled the stands at Patriot Center! pic.twitter.com/8JTbUqIN

Romney in Fairfax: Obama "cared more about the liberal agenda he was pursuing than he did about the economy."

Romney in Fairfax: "Talk is cheap, but a record is real." #RomneyRyan2012 #OneMoreDay

That is the kind of change Americans are looking for.