Certifiable! Sen. Chris Murphy explaining why ‘we’re all screwed’ with…

How about no? NBC News natsec contributor Frank Figliuzzi suggests ‘bipartisan committee’ to…

Dr. Fauci wants you to believe that he never said ‘people should not be walking around with…

No big thing, just the former CEO of Twitter openly tweeting about lining up and shooting capitalists…

As Twitchy reported,  Mitt Romney cancelled planned campaign rallies due to Hurricane Sandy and its devastation. On Sunday, the campaign began using its resources and its bus for East Coast storm relief efforts. On Monday, the campaign announced they would hold a disaster relief event in Dayton, Ohio.

That event was held today.

And the Left was out in petty force.

Lefties already furious that Romney is holding a benifit rally in Ohio. . maybe he should have held a prayer rally?

Romney doing a "storm relief" event in Ohio?!?! What a lying fraud. Politicizing a disaster is about as low as you can go. #RomneyFail

Self-awareness  is lost on this guy. What are you doing, sir?

The lapdogs in the media were also out in petty, and biased, force. As always, the Left and the media are concentric circles on a Venn diagram.

Romney has arrived at his "storm relief event" in Dayton OH. Should see the candidate shortly

"Storm relief event" in Dayton begins with the Romney bio campaign video touting his record as a leader & a problem-solver.

Gee, the campaign didn’t miraculously whip up new press badges after the rally was cancelled and the relief event took its place? How dastardly! Why didn’t they care more about press passes than, you know, the people devastated by the storm? Only the elitist lapdogs would think their passes to be of the utmost import.

Couldn't Romney have found a non-swing state to do a photo op for #Sandy relief? Transparently tacky even by his standards

Look in the mirror, toots.

CNN’s Donna Brazile chimes in with a case of the nutty.

Just look how distasteful it is that Romney is campaigning under the ruse of hurricane relief? #Sandy is still a dangerous storm Mr Romney!

Hey, Donna, you know what’s distasteful? Constantly accusing people of racism. Also, what about President Obama’s constant “Look at me! I’m in the Situation Room, all super serious and stuff” photos?

David Shuster took a break from spewing sexist rants to also whine about … the press passes. No, really. That’s his big argument.

Romney claims he is holding a "relief rally" today in OH. This lie underscored by press passes his camp issued. pic.twitter.com/hdXgJqeI #TAN

And the pitiful Oliver Willis, of Media Matters, desperately cried out for a pat on the head from his Soros buddies.

mitt romney is campaigning on the back of hurricane sandy.

A New York Times reporter tweeted about politics “creeping in.”

Conservatives pushed back against this nonsense.

The fact that they're criticizing Romney for making his campaign visit a relief fund event says 2 things! 1)desperation!…ok just 1 thing

I hate passive-aggressive "this is no time for campaigns" faux outrage. This is America. Democracy stops for nothing.

Boy, liberals are really upset that Romney is campaigning. I guess he should sit around at homer or something.

Plus, he wasn’t even campaigning. On-scene photos and reports show that this was an event held to benefit those who have been affected by Hurricane Sandy. 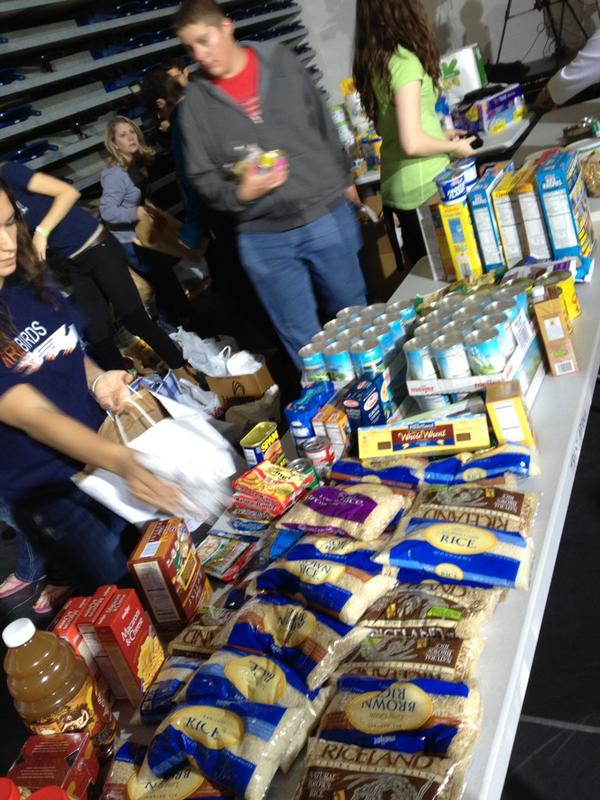 .@MittRomney thanking Ohioans for their generous donations to help those impacted by Sandy. http://t.co/DVjVIORn

And here are reports from one of those generous Ohioans.

We’re getting to standing room only at Trent Arena. Go #Ohio!! #RomneyRyan2012 pic.twitter.com/yLFYgWwb

It was good. Not a typical campaign rally. #Mitt didn't even speak from the main stage; he just stood on a table to the side. LadybugDawny

His comments were maybe 2 minutes. He wanted to keep the focus on #Sandy and not on #RomneyRyan2012. Class act. @LadybugDawny

But, but … press passes!

Next President of the United States works the #Sandy donation line in Kettering #Ohio. #RomneyRyan2012 http://t.co/hcvTOZos

Indeed. Also the American way? Rolling up one’s sleeves and getting to work. Doing what needs to be done to help those in need, as individual Americans working together. Guess who did that?

Eric Draper photo of Gov taking supplies for hurricane relief. The outpouring of support in Dayton was very moving. pic.twitter.com/rsXJnKf3 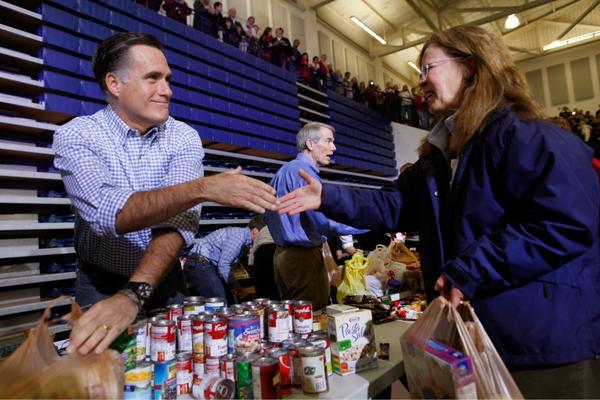 Eric Draper photo of Gov loading up hurricane relief supplies to send to those affected by #Sandy pic.twitter.com/5shbDiZa 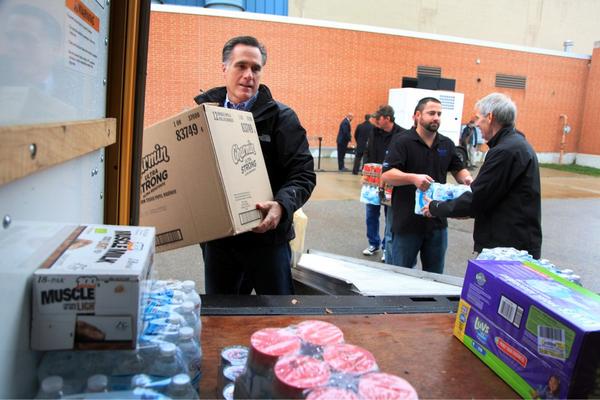 And, that’s part of where the derangement syndrome comes from. Taking matters into your own hands? That doesn’t suit.

Kudos, Governor. And thank you to all who attended the event to aid those suffering from the devastating aftermath of Hurricane Sandy.

Certifiable! Sen. Chris Murphy explaining why ‘we’re all screwed’ with ‘radical’ ACB on SCOTUS does NOT go well, like at all