‘It’s a family show, Ham’: Mary Katherine Ham weighs in on the CDC and that…

There’s another Pride flag design and we can’t decide which is more progressive: the circle… 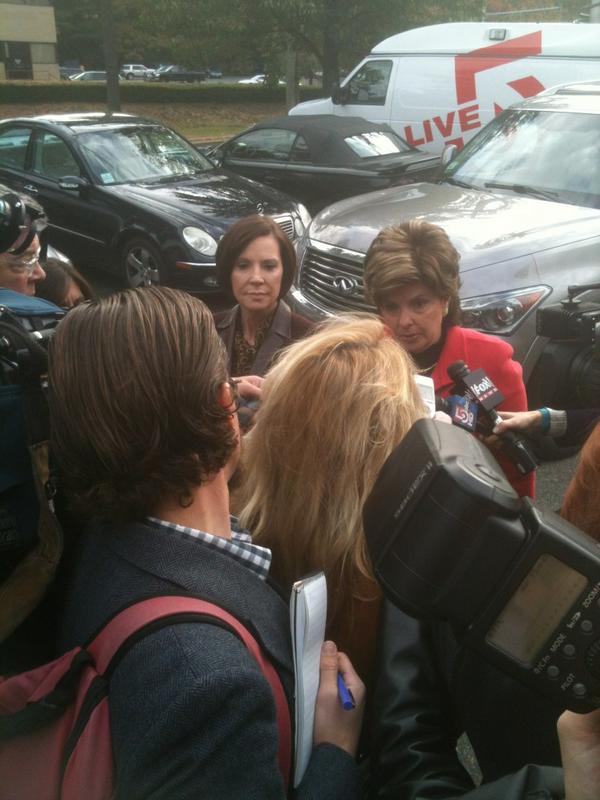 Sigh. As Twitchy reported, Drudge teased the insertion of perpetual grievance-monger Gloria Allred into the presidential campaign. Ever since, much speculation and mockery abounded. It was reported last night, that Allred would show up in Boston today to unleash her October suprise. Or October dud.

Romney testified in a divorce trial years ago. That's supposed to sink his campaign. That's Allred's October surprise. Okay then.

Gloria Allred's October Surprise is… About Money in a 25 Year Old Divorce, It Seems http://t.co/4ENYYl9m

More from Ace of Spades:

Long story short, although Maureen Sullivan Stemberg had a pretty big settlement, in normal human terms, it wasn’t a mega-settlement, and her ex-husband wound up mega-rich. And she seems to have spent a lot of it on contesting the settlement itself. And then she was hit with medical problems.
So, she wants more money.

So the 2006 version of this story was put out, it seems, to pressure Romney to pressure Stemberg to open his wallet and voluntarily agree to increase Sullivan Stemberg’s support.

So, basically, it’s to gin up faux War on Women outrage. Stemberg didn’t receive enough money, because dastardly Romney. Naturally, some who focus on lady parts, not lady smarts, are falling for it.

Gloria Allred: Mitt Romney Lied in Court to Screw Over Friend's Wife http://t.co/eMsenWv5 via Women for Romney – you dishonor your gender.

Wow! How they empower women … by attempting to diminish women with whom they disagree to the point that they try to take their very gender away. You’ve come a long way, baby!

Ridiculous. Ace sums it up.

And I think the devious Ms. Allred is playing the media (and Drudge) for fools in what is simply a straight money play.

Stoke up interest by suggesting this is a ROMNEY SCANDAL and hope that that serves to open the vault.

And I Repeat… This is 25 year old divorce.

Of course, absolute absurdity doesn’t stop the inane Ms. Allred. She is bitterly clinging to relevance, and failing. She hit the courtroom this morning, as predicted.

Why is nobody RTing my LIVE reporting from Gloria Allred's BLOCKBUSTER OCTOBER SURPRISE in Canton MA?

About 40 people in courtroom, most flagrantly violating bailiff's order to shut off cel phones and other electronic devices.

To her credit, that’s at least 30 more than Sandra Fluke had in attendance at her rally. So, there’s that.

Judge mentions that the transcripts (from 1994) have been destroyed by the courts, might not exist any more.

Allred has Romney's testimony, in two volumes, submits to the court.

Judge will allow pool media — but don't go to your TV yet, Staples wants a continuance to review the Romney testimony.

Allred in hallway declines to make any comment. Other attys hightail it pretty quick.

There is only one thing that can make this ridiculous travesty palatable. How about a nice hashtag?

FTW RT @DavidCornDC: .@dbernstein @SarahEBlodgett The hashtag should be #stapled

Gloria Allred's hearing has been postponed to one day closer to NO ONE CARES. http://t.co/HhyQ6qec

That sound you hear is Gloria Allred scraping at the bottom in an attempt to remain relevant. #tcot #p2

This is it? Yawn. RT @MelissaTweets: So Gloria Allred is serving a nothingburger: http://t.co/HCAyWZ1g

Turns out this October the "surprise" is on Gloria Allred. Her credibility is wiped out.

SHOCK: Romney camp in disarray after TMZ drops scandalous BOMBSHELL with only 2 weeks to go. It's over. #tcot #p2 pic.twitter.com/XgOxJXhG

Yes, lapdogs. What about that?

When the media runs with whatever garbage Gloria Allred makes up, will they mention she was an Obama delegate? http://t.co/HMDO1zbY

But, no matter. He has his go-to excuse.

Breaking – Obama will say Gloria Allred is just "Some lady from around the neighborhood" tomorrow.

Or, he knows three Gloria Allreds.

Keep digging, Left. When all you have left is Gloria Allred and her ridiculous duds? Game over.

‘Persuasion requires people TRUST YOU’: Brutal thread explaining why govt. messaging to the vaccine-hesitant sucked and STILL sucks a must-read

‘LMAO, who are you?!’ Alex Vindman begs for help ‘getting the word out’ on his book no one cares about and HOLY MOLY that’s a lotta backfire

‘This is The Bulwark’s entire GIG’: RedSteeze takes Bill Kristol and Jim Swift APART in perfect yet merciless thread