Oh, my! This is a rarity, indeed. Last night, even “Saturday Night Live” was forced to admit that President Obama’s debate performance was, well, “like Barack Obama at a debate.” In other words, epic fail.

This is actually funny. RT @rorycooper Seth Myers: "70 mil people watched the debate, either on tv, online, or from one of the podiums" #SNL

So basically SNL is saying Obama voted "present" during the debate.

RT @dglasscock: "Have to hand it to @MittRomney … Obama did" #snl #yes

Conservative Twitter users were amazed. And delighted; it’s about time. In fact, it’s far past due.

OK, I was wrong. #SNL is mocking both Obama's failure and MSNBC. And it's kind of funny, which is even more rare.

The SNL skits making fun of Obama and MSNBC were funny. 3 f***ing years overdue, but funny.

How atrocious was Obama's debate performance on Wed? Not even SNL could spin it favorably for Their Precious http://t.co/0KBqionG … #p2

RT @DrewHampshire: SNL is mocking the hell out of Obama, Al Gore and PBS. As Newt would say, that's mildly amazing.

SNL mocks MSNBC: ‘A look back at the Obama debate disaster’ http://t.co/7lA7jueu

The Right Scoop has the video of the side-splitting spoof of the stompy foot tantrum at MSNBC after the debate. Must-see television!

And, of course, Big Bird made an appearance. 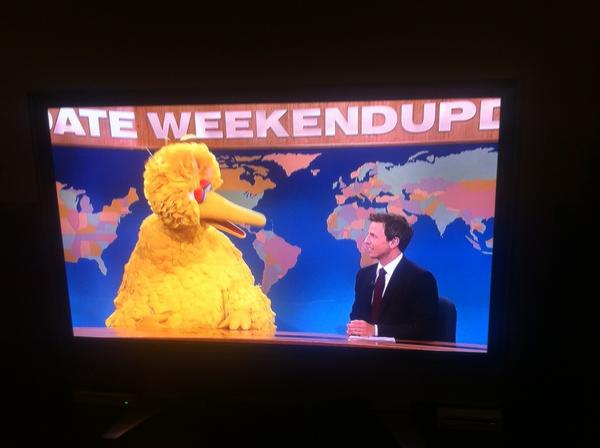 Even more hilarious? Evidently, Big Bird is all the Obama campaign has left. They are banking on Big Bird! Now that is a game changer!