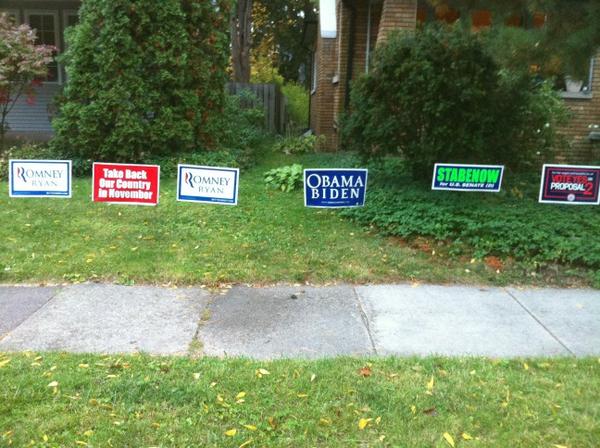 Oh yes, he did! Comedian and Fox News contributor Steven Crowder is a happy sign warrior! He posted a picture this morning of the sign battle he is having with his lefty neighbor. Don’t cross The Crowder, people!

Twitter users are delighted and weigh in with some signature snark.

@scrowder That's great. I love that they're creeping right up to the property line!

@scrowder this needs to be mediated … I'm calling the UN

Heh. Some advice to secure the victory is offered.

@scrowder @WashingtonDCTea I would keep your lawn overly manicured. Make the neighbors look unruly and unkept.

@scrowder put some empty chairs by his Obama signs

@scrowder You want to really bug them? get this sign printed up into gigantic size and put it on your lawn. pic.twitter.com/VvaR8PDW

Oh, make it happen, Crowder! As these Twitter users point out, he needs to watch for vandalism. Lefties are desperate and unhinged, especially after President Obama’s pitiful debate showing.

@scrowder Good for you! My Romney sign has obviously been kicked. 🙁 Don't back down!

Normally the leftists tear the signs down or deface – “@scrowder: The sign #WAR with my leftist neighbor continues… pic.twitter.com/329m1B8j”

Keep the pictures coming, Crowder. Happy warriors are supporting you in this battle and the path to victory is yours!