That’ll show him: Alyssa Milano ‘gave back’ her Tesla now that Twitter is pushing hate…

Dem Sen. Ed Markey’s getting impatient with Elon Musk for ignoring his ‘deadline’

This afternoon, Fox News aired a car chase live. Tragically, it ended with a man committing suicide by shooting himself in the head. On live television.

Um. Apparently someone just blew their brains out on live TV?

Shep looked ill when he realized what had just happened.

"We really messed up…I personally apologize. That was wrong, and that won't happen again on my watch…I'm sorry." #Shep

For those keeping score, Fox obviously (judging from Shep's reaction) screwed up. BuzzFeed and Mediaite chose to put the video up. FYI.

Yet, BuzzFeed and Mediaite felt the need to clip the video and post it.

Mediaite joins Buzzfeed in instantly putting up the suicide clip. Just FYI. No links from me.

Oh, well in that case… MT @BuzzFeedAndrew: Also on Mediaite…

Absolutely appalling. In a quest for sick viral clicks, BuzzFeed and Mediaite posted the graphic video of a man committing suicide.

FOX News apologizes/removes live suicide vid; @BuzzFeed goes in for the kill/hits… disgusting. This man had a family; exercise some tact

Yep, BuzzFeed and Mediaite felt the need to post it. You know, in case you missed it and felt like reveling in a sick snuff video.

This Twitter user thinks they were right to do so.

Yes, people are talking about it. But there is a little thing called human decency. Most on Twitter realize that and give BuzzFeed and Mediaite the business for apparently caring more about viral clicks.

Hi @BuzzFeedBen, could you please share the traffic metrics on that snuff film when you have good numbers? PS: CHA-CHING, buddy!

.@Buzzfeed showing the Fox News car chase suicide on its website is not news. It is a sickening voyeuristic way to get traffic. Truly awful.

Why is @Buzzfeed sharing a suicide video? C'mon guys.

Problem isn't that @BuzzFeed posted the vid, but that their priority was clicks, with no apparent internal discussion before clicking upload 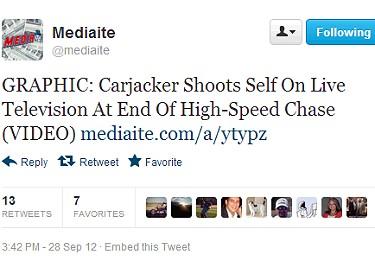 @guypbenson Well, that and the giggling over how much they're pulling in on the pageviews. @BuzzFeedAndrew @fmanjoo @BuzzFeed

And posted it on Imgur? RT @GPollowitz Has BuzzFeed made the suicide a .gif yet?

@BuzzFeedBen @buzzfeed Please take it down. I know someone's gonna post it. Doesn't need to be you.

@Buzzfeed's @buzzfeed @mediatecom apparently have no concern for that man's family. What a bunch of pukes.

Dear @BuzzFeed and @Mediaite. Some things simply don't need to be rebroadcast. In any form. Thanks. #MediaWatch

If you're tweeting or RTing the link to that suicide video, think about what you're doing. Imagine if it were a loved one of yours. #decency

Hey @BuzzFeedBen @buzzfeed @mediaite People are talking about the Muslim video…including the president. Why don't you tweet it out???

WOW @buzzfeed and @mediatecom have no shame. They already put the video of a live suicide up. Shameful and disgusting

In the meantime, everyone can take the advice of IowaHawk.

Somehow I have developed the magical ability not to click links to suicide videos.

I feel obligated to tweet this because that video could trigger people: 1-800-273-8255 National Suicide Prevention Lifeline