Meeting with Obama? He don’t need no stinkin’ meeting. Israeli Prime Minister Netanyahu killed it during his address to the United Nations this afternoon.

The hashtag #Bibibomb immediately sprung up after Netanyahu used a powerfully simple diagram to show the danger Iran imposes.

Haha stupid Netanyahu made a chart that's easy to understand 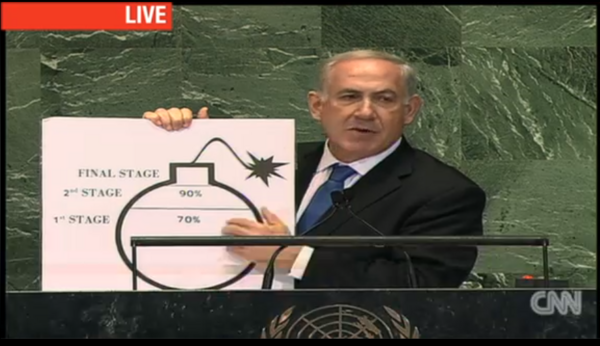 Bibi's use of that chart was one of the most effective, gripping, uses of a chart I've ever seen. Is the world listening??

#Netanyahu cartoon deliberately simple – trying to make point that #Iran bomb so serious it should be obvious to all. #UNGA

#Netanyahu 'I believe that with a clear red line, #Iran will back down.' #UNGA

#Netanyahu #diagram was great political messaging. Clear, simple message. No question of where he stands.

Netanyahu's speech today made Obama look like a very small person who is only interested in his own reelection. @davidaxelrod

That it did. But will President Obama even understand?

RT @benshapiro: You know why Bibi used a bomb diagram? So Obama has no excuse to misunderstand him.

Since Obama is willfully DEAF to what he calls #noise re Iran nuclear powers, he will be willfully BLIND to Netanyahu's bright #redline

Yep. Evidently the Smarter Than You ™ crowd is still misunderstanding. Reality, it’s so hard. See, it’s super hilarious to mock the fact that Israel is under constant threat from crazy evil-doers who wish to wipe them off the face of the map. It’s hilarious that Prime Minister Netanyahu is desperately trying to make people understand the dire threat faced. Aren’t your sides aching?

#bibibomb not sure that cartoon has helped Israel's cause

Okay, it's official: #Netanyahu has no idea what he's doing. He has just turned a serious issue into a joke.

With all the Jewish comic book talent out there, he had to draw a Wile E. Coyote bomb? #Netanyahu

Smart reader emails re Bibi: "Jack Kirby, Stan Lee, Will Eisner, and he pulls this nonsense…"

"We come from the greatest race of comic illustrators in the history of the planet, and he comes up with a fifth grade science fair drawing"

Obama gets halo, Bibi gets heil // Shock Photos of Netanyahu at UN from AP, Reuters http://t.co/crPpDB81 via @sharethis

And we thought Romney was stupid till we got #BibiBomb

OMG I THOUGHT THIS WAS A JOKE Netanyahu thinks Iran is Wilye Coyote?! #BibiBomb RT @ZekeJMiller: Bibi and Bomb http://t.co/03SUxYDE

@blogdiva It was his way of asking USA for more aid."see i cant even hire professionals to teach me how to draw, or afford colorful markers"

These are the same people who blame terrorist attacks on videos, as this Twitter user snarkily points out.

Bingo! NRO’s Jim Geraghty and others sum it all up best.

Lots of folks on Twitter more animated/bothered/incredulous about Bibi's illustration than about Iran's actual nuclear program.

@Jewtastic A good speaker knows his audience. The int'l kindergarten called the UN was given a leadership lesson by Bibi #UNGA #bibiBomb

That they were. Were they listening? Will they learn?

The people at whom the Smarter Than You ™ crowd sneer certainly are.

Not a question of when Iran will get the bomb, its a question of how long before we can stop them from getting the bomb. #Netanyahu #UNGA

We stand with Bibi and Israel. And so should we all.