Watch this video of the last Dinner with Barack, then make a donation to be automatically entered to be at the next one.
Once the deadline’s passed, you may not have this chance again, so enter today—we’ll cover your airfare and hotel.

Big spender! He’s really pushing this last supper thing. Will he whine again about not being the most interesting person in the room? President Obama’s Twitter feed tweeted it out the other day, too. With what we assume is supposed to be an invitation. Only it looked like something scrawled on Jim Messina’s or David Axelrod’s hand for the creepy #ForAll campaign.

Two seats at the last #DinnerWithBarack of this campaign could be yours, but only if you enter: http://t.co/7sXuggyU, pic.twitter.com/61ZB2Uqu 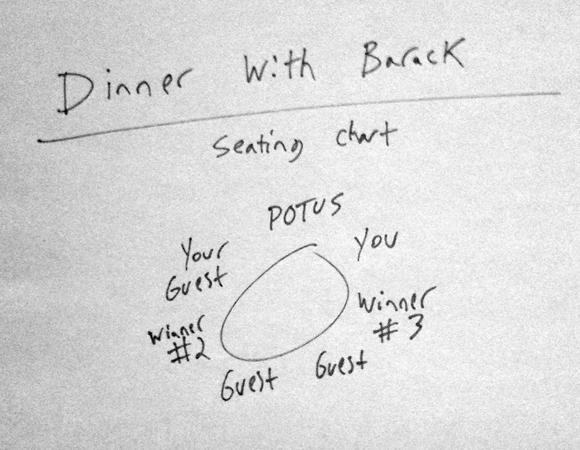 Sweet lord, this #DinnerwithBarack thing looks like someone thought it up 10 minutes ago in their bathroom. #tcot pic.twitter.com/3Z6UmjCU

Hi @BarackObama I wonder do your union friends get paid for #DinnerWithBarack ?

And today Twitter users decided to RSVP with a resounding “we are busy that night, washing our hair and stuff.”

#DinnerWithBarack How much is that doggy in the window?

They'll be serving lame duck. RT @BarackObama: See what it’s like to have #DinnerWithBarack—then enter to win two seats. #nobama2012

@BarackObama I'd rather see you do your job….. #dinnerwithbarack

“@BarackObama: have #DinnerWithBarack enter to win two seats at the last one of this campaign<seriously? Celebrity or president?

Will Bill Ayers grace us with his presence? RT @BarackObama: See what it’s like to have #DinnerWithBarack http://t.co/lhmuEBQ0

#DinnerWithBarack Includes blaming Bush, Michelle not sure if she's proud of America yet, and a 6 iron.

Anyone have Netanyahu's email? May be only way.MT“@BarackObama: See what it’s like to have #DinnerWithBarack—then enter to win two seats.."

Heh. As Twitchy reported, Robert Gibbs had a hard time justifying President Obama’s snub of Netanyahu and other world leaders, while having time to hit “The View.”

Keep the invite turn-downs coming, Twitter! Giggling is our cardio.