The first lady addressed the Black Congressional Caucus dinner last evening and incessantly, and disgracefully, whipped out the race card. What is the “march of our time?” Oh, icky old Voter ID laws, natch. The likes of  Ellen Barkin, Michael Moore, Joe Biden, the NAACP, Attorney General Eric Holder and his apologists, Rep. Keith Ellison, and other unhinged leftists (redundant) keep screeching about Voter ID laws being the most suppress-y thing ever. Now, they are grossly equating it to the civil rights struggle and, even lower, to slavery. How repugnant.

The rationale? No greater bigotry than … asking to see identification. How dare anyone want for people to have identification so that they can fully function in society? Racists!

First, a little canoodling with Al “blood on his hands” Sharpton. 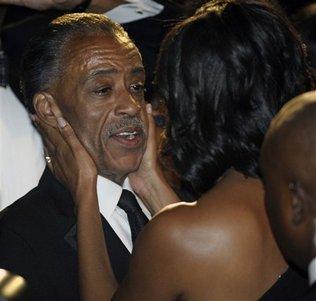 This is the movement of our era, protecting the fundamental rights of all. @michelleObama #cbcfalc2012

First lady: Voting rights is 'movement of our era' http://t.co/Zv93T9O5

Heh. Sorry, Occupiers! Voter ID laws are the new “movement of our era.” Hey, first lady, what about all that suppression at the DNC in Charlotte?

Did anyone read this ludicrous speech before she gave it? Or was it all an elaborate “punking?” No one could have said this speech with a straight face. Impossible!

Michelle Obama: "we cannot let anyone discourage us from casting our ballots … make us feel unwelcome in the voting booth. #cbcfalc2012

We must not even let the dead feel unwelcome. Vote away, dead people! It’s the Democrat Chicago Way.

I hope the folks who diss voting are listening to First Lady Michelle Obama at #cbcfalc2012. She is speaking truth about OUR history

In Obama’s post-racial world, there are two Americas, evidently.

And, a slavery mention: Drink!

“We cannot let anyone discourage us from casting our ballots,” she said. “We cannot let anyone make us feel unwelcome in the voting booth. It is up to us to make sure that in every election, every voice is heard and every vote is counted. That means making sure our laws preserve that right.”

Republicans have backed voter ID laws, which often require photo identification, arguing that they help prevent ballot fraud. Democrats and voter advocates say the measures could be used to keep some poor and minority voters away from the polls because it can be more burdensome for them to get the required IDs. Opponents have mounted several legal challenges to the laws.

Of course, the lapdogs spin it as some nefarious Republican plot to suppress. See, it’s not just Democrats who oppose: “Voting advocates,” too! The bigots in the lapdog media believe that some people are too stupid to figure out how to get ID and are too irrelevant to ever need it to function in society otherwise. Disgusting.

Attorney General Holder weighed in with some more absurdity.

Atty Gen Eric Holder: As long as I'm attorney general of the US, the right to vote WILL be protected for all! #cbcfalc2012

But lives won’t be, due to his dangerous incompetence. Too bad he didn’t spend any time  protecting Brian Terry.

If Michelle Obama is talking slavery and segregation, who's really going forward?? http://t.co/xfo0sz2M

Mrs. Obama: "We cannot let anyone make us feel unwelcome in the voting booth." Was that a warning to Biden?