They said if we voted for McCain, the Zombie Apocalypse would come … and they were right! As Twitchy reported yesterday, these particular zombies pledge allegiance to the Flag of Obama.

I pledge allegiance to the flag of the Cult of Personality… http://t.co/6Ksfb7fZ

The Obama flag replaces the states with himself. "Les etats, c'est moi" https://t.co/ynfPPLJv

If someone burns the new Obamerican flag, I expect the WH to exhonerate the vandals &blame"2016: Obama's America." LET'S TREND #Obamerican

And, they write things on their hands and take creepy pictures of themselves to profess their loyalty to the cult.

What our country needs is in this pic. What would you write? Send your own #ForAll pics & I'll RT the best ones! … http://t.co/j80WY99m

I'm all smiles for equal pay and the right to choose #ForAll. Share why you're voting Obama & I'll RT pic.twitter.com/I3EV9spd 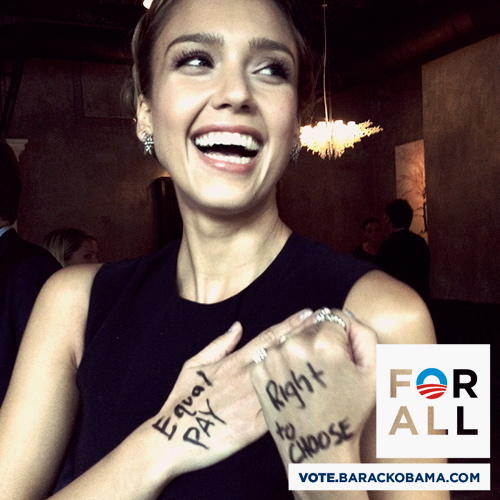 Together, there's nothing we can't achieve. Here's why I'm voting for @BarackObama. #ForAll —> http://t.co/aSQziWCR pic.twitter.com/6mbwpEMK 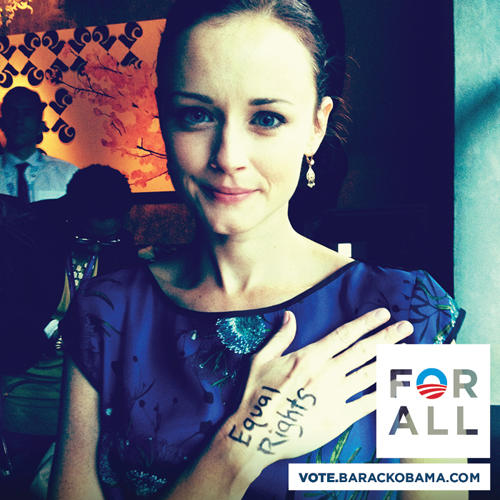 Obama For America is promoting even more frightening photos.

Look at the blank, brainwashed stare!

He wants his participation ribbon!

And here is a collage of creepy.

There's a new way to say you're voting for President @BarackObama. Post a photo with #ForAll to say you’re in. pic.twitter.com/Wuzlznd8

Oh, dear. “Julias” worshipping a cut-out. Obey! Well, to be fair, a cut-out is apropos for an empty suit.

Derek Hunter points out all the ways this has failed.

From The Daily News:

The weird thing about this attempt to create a spontaneous Twitter meme is just how many of the celebrity pictures were taken at the DNC, long before yesterday. Leto and Longoria are wearing their convention credentials. That means someone in the campaign thought this up, planned it, and unleashed it to…a resounding splat!

Bless their fail-y hearts! Fail, it did. Twitter users are using #CultofObama, #ObamaCult and #Obamerican to rightfully, and endlessly, mock the creepy cultists.

@MichelleMalkin @TwitchyTeam TY so much. The Messina Creepy #CultOfObama photoshops made my day. You & TT will get me thru this election!

@jessicaalba Um, No. Nobody wants your #ObamaCult Kool-aid. Stick to making crappy movies.

I want no part of your #ObamaCult RT @DWStweets Why I support @barackobama: opportunity #ForAll our kids. pic.twitter.com/YQRBO9KJ

#Obamerican Flag symbol of an egomaniac out of control&zombies od'd on kool aid.

@amandacarpenter I pledge defiance to the Obama flag and to the narcissist for which it stands. #Obamerican

And this Twitter user puts it all in a nutshell.

Out of all of Obama's cultist hand models..Interesting that none of them have written "For Freedom" #ForAll

Bingo. Obamerica? No, thank you. We choose freedom.