Black Friday came one day early at Kmart this morning with long pre-dawn lines at stores throughout the country:

I can't believe how many people are outside of Kmart right now.

Incredibly long line here at the Kmart in North Alabama. It's only 347am and people are lined up, wrapping around the building.

HAPPENING NOW: The Davenport @Kmart parking lot is already full. More than 100 people lined up for 6 AM opening: http://t.co/emqeJ3cf

Many shoppers are hoping to score an inexpensive television set or tablet.

Bargain shoppers started lining up at midnight at the Kmart in McIntyre Square. All tell me they are buying tv's. pic.twitter.com/FixdzGiB 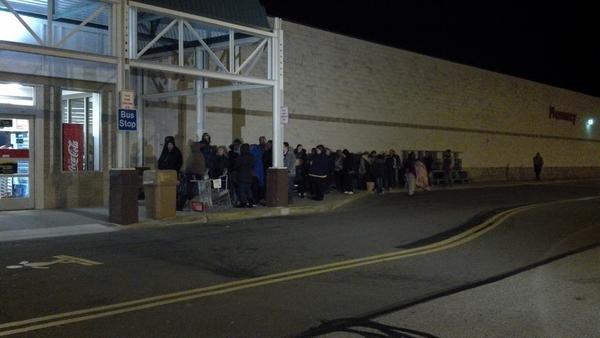 Hitting up Kmart at 5am for a TV, then back home to enjoy my favorite thing about the holidays…the Macy's Thanksgiving Day Parade 🙂

Waiting 6 hours at Kmart for some tv action! ?

All ready to camp out tonight at kmart for a tv 🙂 starting black friday early!!!

Pissed I waited at Kmart since 4, and didn't get my tablet bc they only had 3 of em.

Up at 530 to get to Kmart, to wait in line and pray they have an android tablet left so i can buy it for my dad. #EveryoneBuyTheTVInstead

My sister just told me were going to Kmart to buy a tablet and TV AT FIVE IN THE MORNING !!!!

Kmart Jack two bitches was bouta fight over a TV

This is stupid. Dragged to Kmart at 5 in the morning because my parents want a tv. I just wanna go back to bed. pic.twitter.com/DcdajEsE

This is what most in the line of 200+ wanted @ Kmart in Mableton, but there are only 12 on sale. #news pic.twitter.com/mSX5vuPe 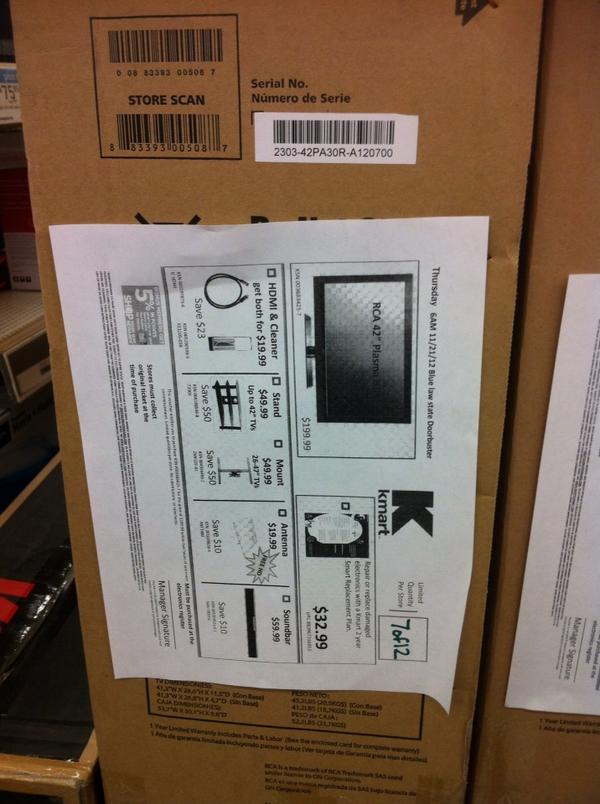 Unfortunately, the TVs and tablets sold out quickly, leaving many consumers empty-handed and disappointed:

Pissed I waited at Kmart since 4, and didn't get my tablet bc they only had 3 of em.

I was up a 5 to go get a damn tv for my momma from Kmart and they only had 12. And the line was damn near to the road..

This why KMart so damn stupid now! How tf you gone have 1 TV?

Is it wrong that I wanna twerk for my life out here in this line? I'm outside with Jackie for this $97 tv at Kmart. I get nothing

alas, ye olde, kmart was stuffed with many a peasant. a line an andoconda would be put to shame in length. i will not own a tablet nor tv.

Shoppers at @kmart are furious! I'm glad I wasn't shopping for electronics!

Some tweeters had a different reaction to the news: