Obama campaign admits WI is in play, but buries the story on their donation page. Gotta go here to see it 1st hand. https://t.co/sZEsPLJj

Nowhere on the page does Obama state that Wisconsin is “in play.”

@EWErickson @PeterHambyCNN Look again. The tweet contains an ivitation for "supporters" and has ticket prices. It's still posted.

@EWErickson There is NO excuse for Peter Hamby when the link itself read "Donate Obama" not buying it. He should be fired for being incomp.

@EWErickson I really don't understand why you posted this. Or why you came to CNN Hamby's defense. Obama donation site is NOT news.

@EWErickson @PeterHambyCNN link is to registration for Obama fundraiser, not "news" WI is in play pic.twitter.com/qrJAjfQG 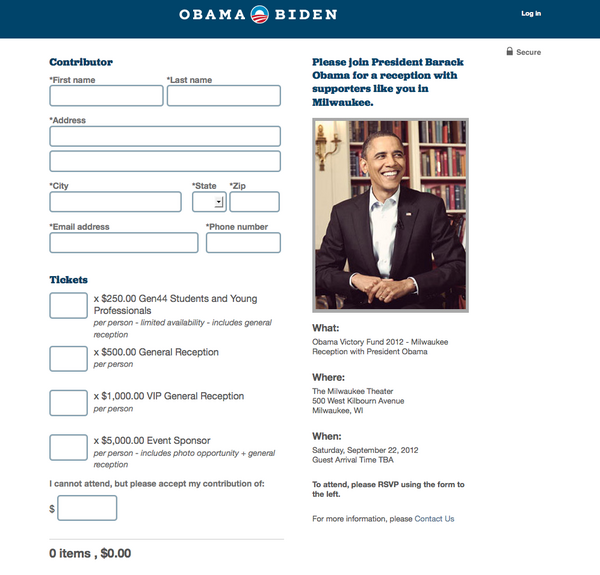 Earlier today, Erickson authored a blog post claiming that GOP presidential nominee Mitt Romney is losing the presidential election and if the election were held today Obama would prevail. By contrast, a nationwide Rasmussen poll released this morning shows Romney 2 points ahead of Obama.

@Michigan2SS Obama hasn't had to go to Wisconsin at all until now. That he has to go campaign there means it is in play.

@BeckyThom10 @50fables at the time that fundraising page was the only place on the net acknowledging Obama was going to WI.

@MomMilkshake but there was no article at the time. @PeterHambyCNN's tweet came before the AP article everyone thinks he should have linked

We’ll leave it up to readers to decide about Erickson’s claim the the Milwaukee fundraiser amounts to a newsworthy, tacit admission by Obama that “Wisconsin is in play.” Obama has had fund-raising receptions in many states, such as Washington, Oregon, California, and Maryland, that are not considered battleground states.