‘This will raise Stelter’s ratings!’ Babylon Bee story on CNN’s new format is…

‘Black unemployment rate rose to 9.7%’: Mollie Hemingway breaks down jobs report by the…

The tweet above is from the New York Times’ lead technology columnist, Nick Bilton. He posted it at 10:30 pm last night

It was followed this morning by this tweet from New York Times writer (and former executive editor) Bill Keller:

THERE IS A FAKE OP-ED GOING AROUND UNDER MY NAME, ABOUT WIKILEAKS. EMPHASIS ON "FAKE. "AS IN, NOT MINE.

Bilton is supposed to know something about the Internet. As one Twitter user pointed out, the hoax op-ed piece was not posted on the New York Times’ domain (nytimes.com). It’s a significant oversight on the part of Bilton:

If it’s any consolation to Bilton, he wasn’t the only prominent journalist who got snookered:

Does anyone know what Bill Keller's referring to re: State Dept pressure on Visa/MC to cut off newspapers? http://t.co/lokOovL4

A lot of people who fell for the hoax are feeling a bit embarrassed this morning:

Well, I was taken in by the fake Keller Wikileaks op-ed – and I see I wasn't alone! I did wonder about "government checks and balances" tho

Oh fuck me, the Keller op-ed is fake?

Then again, maybe it’s one of those “fake but accurate” things?

Well, the op-ed may be fake, but Bill Keller still asserted #WikiLeaks' protection under 1st Amendment a few days ago. http://t.co/tSVxh5nM

interesting — whoever wrote that fake op-ed allegedly by @nytkeller used a couple of chunks from his email to me: http://t.co/qjjRuKu3

How long has this been in the works?

Fake NYT & PayPal domains registered at same time on March 30, '12 with French registrar Gandi. Someone has been planning this for a while

Updates: Bilton has deleted the tweet in which he publicized the hoax op-ed. Here is his tweet announcing the deletion:

I just deleted a Tweet sent late last night that was from a fake NYT Bill Keller account.

Of course, this makes no sense. (Ed. note: Actually, it does make sense. See our updates below.) The tweet that Bilton deleted this morning was sent by Bilton from his (Bilton’s) own account, not someone else’s. What “fake Bill Keller account” is Bilton referring to?

Is Bilton saying that he was unable to distinguish between Bill Keller’s real Twitter account and a fake one?

For one thing, at around 10 am eastern time, Keller claimed to be an expert on dressage:

Also, at about 9:30 am eastern time Keller retweeted the hoax op-ed:

It’s possible Keller was just trying to call attention to the hoax op-ed in order to debunk it. But is also seems possible that someone else has gained access to Keller’s account. Twitchy will continue to monitor the story and will update this post as more facts come in.

Re-reading Bilton’s tweet, above we see that he attributed the op-ed hoax to @nytkeIler as opposed to @nytkeller. (Look closely. The first “l” in “keller” is a capital I.)

When we go to @nytkeIler, we get a “Sorry, that page doesn’t exist!” message. Perhaps the page was populated last night when Bilton published his tweet.

In any case, it appears that Bilton, the lead technology columnist for the New York Times, was unable to distinguish a fake Bill Keller Twitter account from the real one.

Bilton has provided more details, confirming what we wrote above: 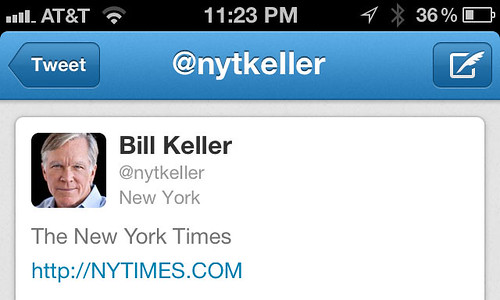 The account above looks real, right? Bill Keller’s name, photo and URL are all correct. Most importantly, his Twitter handle reads: @nytkeller.

After suspecting something was off with the account — namely that it didn’t have a little blue “verified” symbol next to it and didn’t show an accurate follower count — I discovered that the two “ll”s in the Twitter handle were actually a capital “i” and lowercase “L.” So in Twitter’s app, it looks like a capital “ll” when in reality it spells his name with an “il.” I notified someone at Twitter late last night (see the timestamp of the screenshot) and asked if this was a Twitter bug, or a fake account and they said they would investigate. It turns out, it was the latter.

Bilton says he notified Twitter immediately of his concerns:

@TwitchyTeam Thanks, I learned this moments after my initial Tweet late last night and notified Twitter. http://t.co/aC71BXRC

Why, then, didn’t he post anything to Twitter? He left up the link to the hoax op-ed for about eight hours. We asked Bilton and to his credit he replied:

@TwitchyTeam Because, as I said, I asked Twitter if it was a bug or fake and was waiting to hear back from them.

@TwitchyTeam And as for the URL, Web URL's don't show up in the Twitter iPhone app.

Yes. We admit it. WikiLeaks (Assange & co) and our great supporters where behind the successful NYTimes banking blockade hoax on @nytkeller.

Assange:"If the NYTimes cannot act with honnor to defend their 'sources' from economic censorship then we'll just have to do it for them :)"

What is not a hoax, is that WikiLeaks is under illegal economic censorship by US financial insitutions and NYTimes says nothing. The rats.

‘Love is dead’: There will be no fourth date for the guy who went viral at the Arizona Diamondbacks game