The Promenade at Howard Hughes Center in Westchester, Los Angeles is on lockdown today as police respond to reports of a late-night armed robbery and hostage situation at Nordstrom Rack. A SWAT team is on the scene and people at a nearby Rave Cinemas are not allowed to leave during the standoff.

Swat team stopped our movie and put the whole mall on lockdown becau @ The Promenade at Howard Hughes Center http://t.co/9pRGWGW1

Rave cinemas keeping patrons in to watch zero dark thirty and gangster squad. Nice of them but definitely ironic – cops or terrorists? 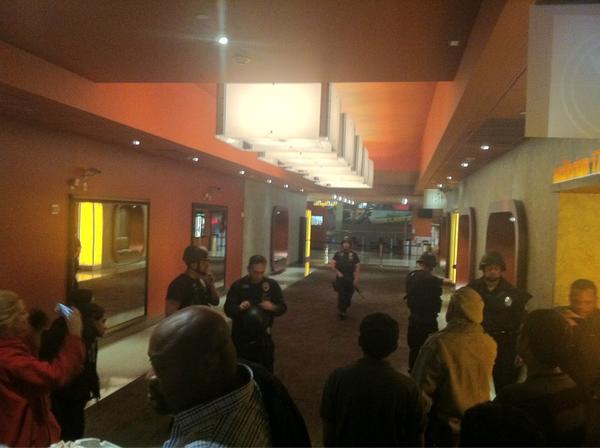 There may be 200 people inside the movie theaters.

One Twitter user says he is with the mother of an employee being held hostage at Nordstrom Rack:

@PamelaChelin employee her mother is waiting

@PamelaChelin employee her mother is waiting

Reports from others on the scene:

Gangster Squad was really good!!! They still won't let us leave though, so they're going to play Django for us now…..

@richardrushfield Went to leave and the employees told us the promenade is on lock down and no one could leave. Aftr that they spilt us up

@PattiPMS57 No they close at 10pm. They came in after they where closed. We are still on lock down.

@PamelaChelin Yes we want to get out! They won't let us!

@BuzzFeedEnt Seeing big flashing lights like an explosion. It stopped now so hope they got in !

This moviegoer appears to have made it out of the theater before the lockdown.

Our Movie stopped at theater in building next to nordstroms hostage situation. We ran through exit. Safe now

bomb squad and special tactics unit here. They just rolled out the bomb robot. Over 14 heavily armed police left the building 5 min ago

Unconfirmed reports indicate 14 hostages have been rescued and no arrests have been made.

LAPD not releasing anyone or any officers, they have a second crime location they are working up at the moment.

The theater lockdown is still in effect:

@manolocontrabaj They just told us that they are looking for them which tells me they really caught them! This is the 5th hour + on Lock!

Audience stuck inside Rave Cinema are being told they'll be able to leave in 30 min.

The latest details on the incident:

People at the theater are being released.

@PamelaChelin They just told us that LAPD is going to come in a escort people to their cars! Thank You !

The latest on injuries: One hostage was reportedly stabbed and another was sexually assaulted.