Multiple injuries are being reported after a commuter ferry reportedly hit a dock during a “hard landing” in lower Manahattan this morning.

A passenger reports that the impact was “huge” as the ferry landed at South Street’s Pier 11.

Ferry passenger says ferry made huge impact as it was docking pic.twitter.com/49FWvYbW 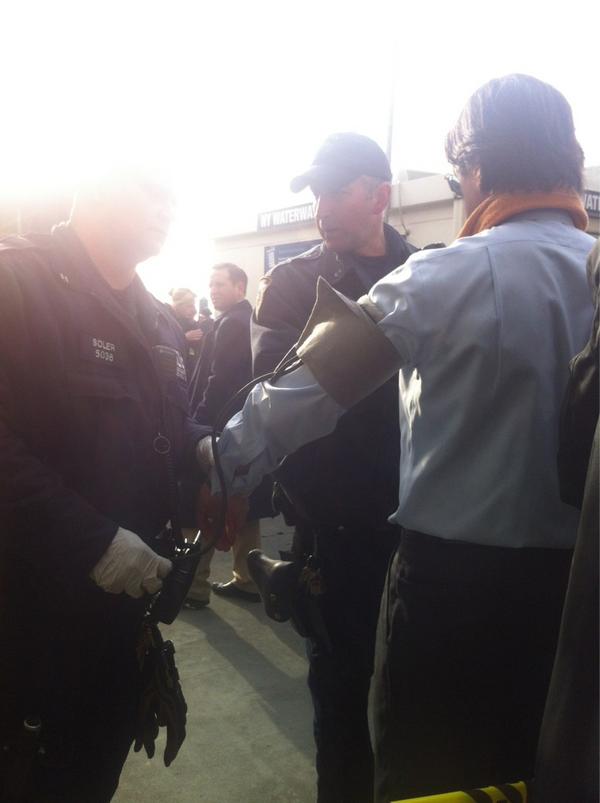 NYPD says everyone is now off the ferry. Still lots of passengers laying on the dock. Press just got pushed off.

WABC TV showing a pretty big gash/hole in the side of the lower Manhattan ferry.

More images from the scene:

20-plus are sitting or laying on dock cement. Others are being led away with help. Saw one responder in scuba gear pic.twitter.com/icJYax7O 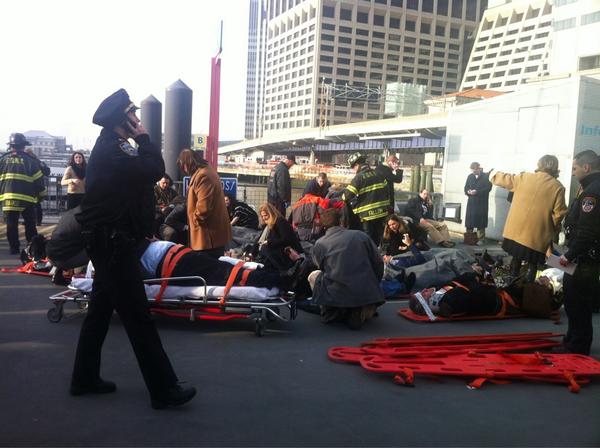 MANHATTAN: U/D PHOTOS FROM THE SCENE FROM THE FERRY THAT CRASHED INTO PIER 11 INJURING 60 #911BUFF http://t.co/cN0qVwLg http://t.co/nXyAnQJB

I was getting off a ferry at the same dock as apparent Manhattan accident involving Seastreak ferry pic.twitter.com/efxKxSM9 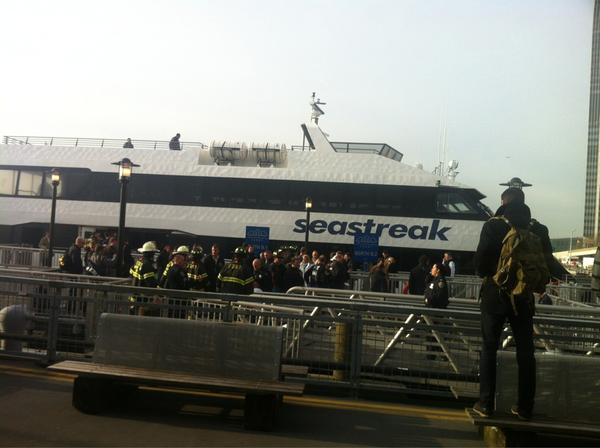 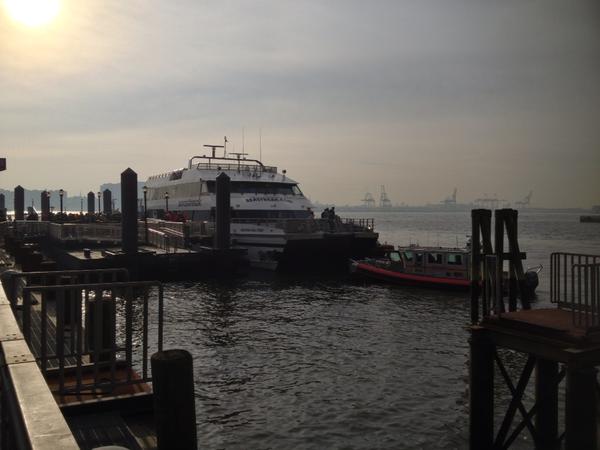 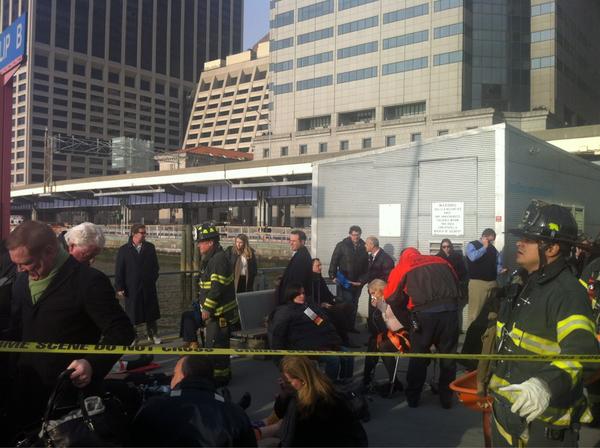 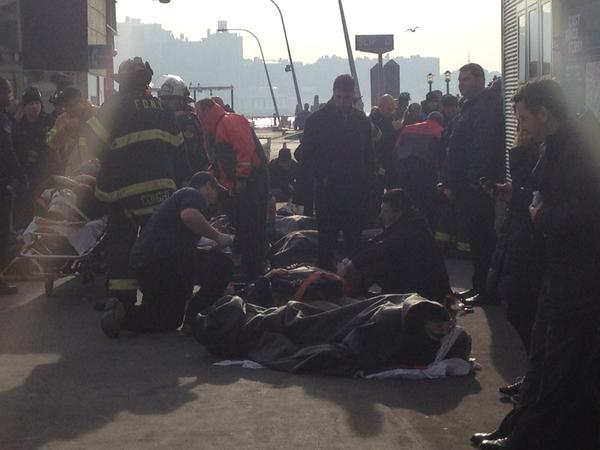 MANHATTAN: DRAMATIC PHOTO OF THE CHAOS OUTSIDE THE FERRY MOMENTS AFTER IT CRASHED INTO PIER 11. 60 INJURED. #911BUFF pic.twitter.com/cWoTWAyN

The damage to the ferry appears severe.

Here is the hole in the front of the #SeaStreak #Ferry. Hope no serious injuries pic.twitter.com/pCXcn0JI 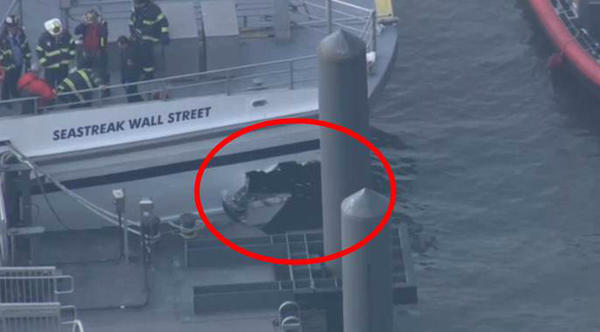 Damage to ferry from hitting Pier 11…..I counted approx 30 injured – may still be more on ferry pic.twitter.com/THATE4Oh 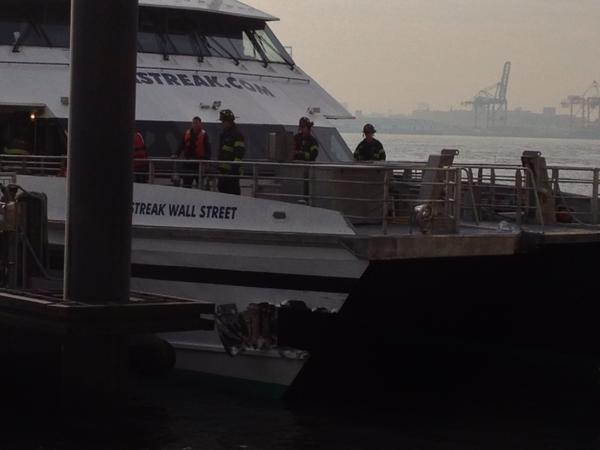 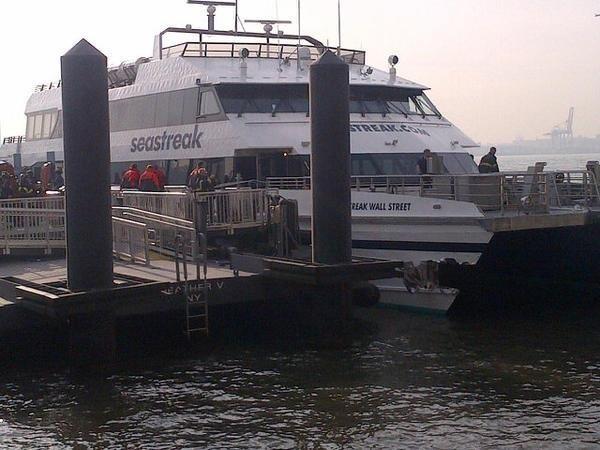 As many as 30-50 injuries are being reported.

CNN: FIFTY INJURED IN FERRY CRASH, ONE OF THEM "CRITICAL"

One of the 300+ ferry passengers provided eyewitness reports: 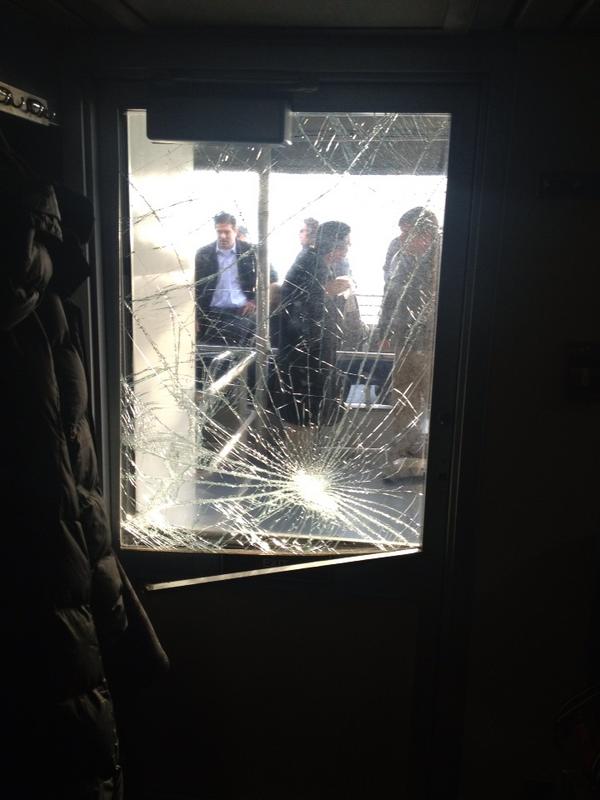 @cowerks hah yeah man, for once I was sitting down so I was just fine. Lots of people went down though.

One ferry passenger to NBC News: "Full speed right into the pier."

The captain will undergo routine drug and alcohol testing.

NBC News: Coast Guard is on the scene at the ferry crash in NYC. Will conduct routine drug and alcohol test on the captain and crew.

Per NYPD. "Soft numbers subject to change" more than 340 on board. 57 injuries.

Mayor Bloomberg is headed to the scene.

Could this be the launch of his War on Ferries?

A close-up pic of the ferry damage, via the Coast Guard: 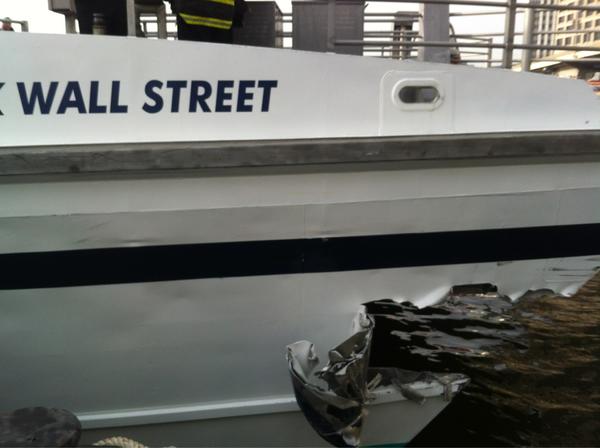 A view from inside the hull:

#USCG investigates cause of ferry allision in #NYC. View looking out from inside the ferry vessel's hull. pic.twitter.com/DWWhOQzZ 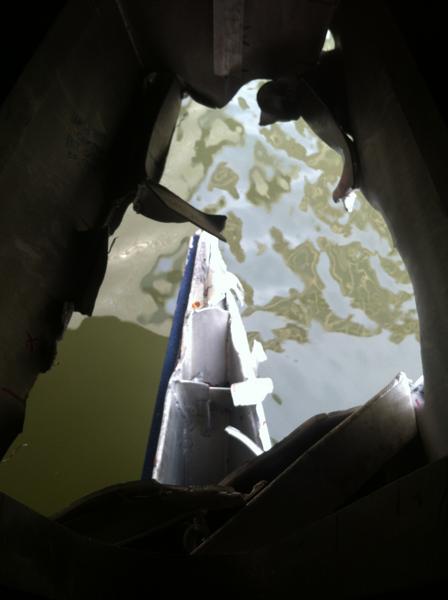 A full investigation is expected.

Briefed by @NTSB on #ferry crash & plan for full investigation so that we can take steps to avoid future accidents http://t.co/TIOKwPZ5