Because nothing says “relief for Sandy victims” like a pleated leather skirt paired with a hoodie, here’s what Kanye West wore to the 12-12-12 benefit concert: 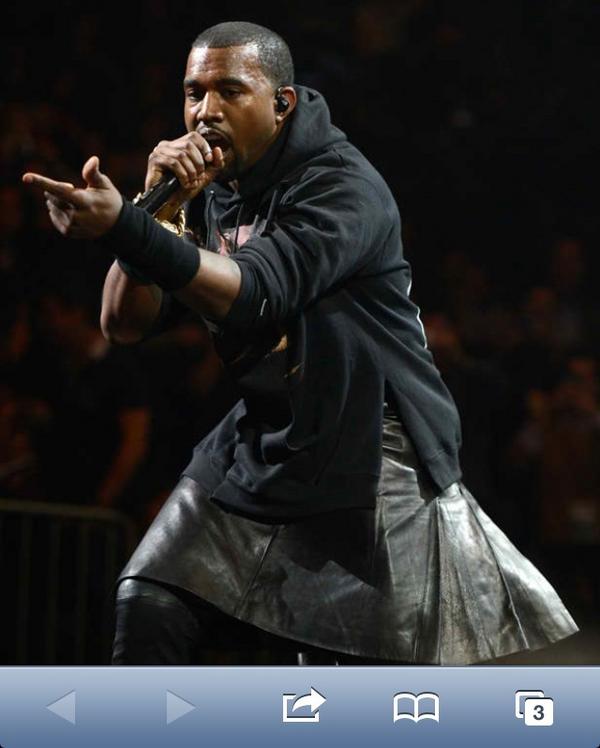 Imma let you finish, but the Twitterverse is pretty sure where Kanye got that skirt.

KANYE IS WEARING A LEATHER SKIRT Kim K. must have picked that out…thats the only logical explanation 4 this… #121212concert

Kanye is that skirt from the Kardashian Kollection? #121212concert

Could it be? Did Kanye raid his girlfriend’s closet?

Awwwwwwww I'm so excited right now!!!!! He looks so cute!!

Of course! It had to happen:

Nothing but the finest pleather money can buy. Yeah, i'm fly. #121212Concert

Sorry everybody. This is awkward for me too. #121212Concert

Damn, i was hoping @jamiefoxx would show up in person. Maybe in a leather halter top. #121212Concert

Anybody know if @foofightersdave is looking for something to wear for his set? #121212Concert

For those of you wishing to purchase a similar garment, go to your local Scottish S&M outlet.

Im thinking of doing a duet with Roger Daltrey's pecs.

Alright, goin in the suitcase for the night. @kanyewest is taking me shopping for matching hooker boots tomorrow.