‘Way to stand up for press freedom’! Proud journalist Jake Tapper is ‘just…

‘The height of privilege’: Becket Adams’ shreds all the Trump-triggered ‘lost…

Journalism! NBC News attempts some seriously ‘hardcore deflection’ to trick the public into…

Since Twitchy launched in March, we’ve been documenting daily evidence of conservative Twitter domination and hilarious liberal hashtag failures. Whether it’s hijacking progressive hashtags or launching their own, conservatives rule the political Twitterverse.

#tcot was most used political hashtag on twitter this year, followed by #teaparty & #gop http://t.co/bX9mqbTt

And it’s far from the only top conservative trend. The next four spots went to #teaparty, #gop, #romney and Mitt Romney. 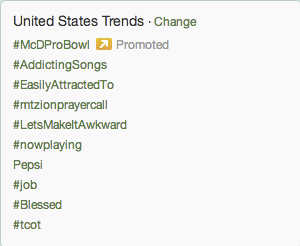 Congrats to all the happy warriors on Twitter who delighted in crushing narratives, mocking the steady supply of mock-worthy liberal nonsense  and tweeting truth to power! It’s not the only battleground by far, but it’s one we won’t cede.

Here's to another year of conservatives dominating the online conversation #tcot #gop http://t.co/c3NKlzxY

Now let’s translate that into domination at the polls!