“Ice Loves Coco” is currently in its third season and there’s nothing like a very public marital spat to get the ratings up. Yesterday pics surfaced of Coco getting a little too close for Ice-T’s comfort with rapper AP.9.

Coco how could you do this to Ice. There's no hope left in this world! pic.twitter.com/HoslsnDC 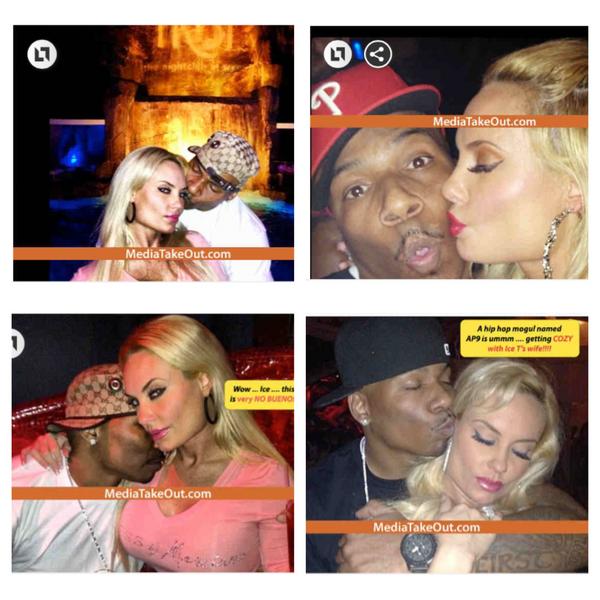 Coco assured fans there was nothing going on in the photos that show her canoodling with another guy. But Ice-T wasn’t about to let it slide. In a since deleted tweet, he wrote, “Coco’s in Vegas. She has given me her explanation of the pics on the net from her fist weeks out there with some dude.”

Ice deleted all but one of the tweets about an hour later. So much for needing to “say this on Twitter.”

But Coco was on hand to make things even more awkward by responding on Twitter.

Ice is right,the pics I took with this man were in poor taste & I disrespected my husband however the pics were the only thing that happened

I feel so sad,the bottom line is I love Ice & I can understand why he's upset theres no excuse for my actions.I'm so sorry baby & to evryone

I only saw 1 of the Coco pics. As a married woman I'd never pose like that w/ another man! She'd better learn the church hug! Sheesh!

"Sometimes fans take silly pics" she said ;____;! Man, how many of yaw ever took a silly pic nuzzling and snuggling with Coco?

Coco took more than just pics with that man…judging by the pics,that was not just 1 night…and who lets another man hold them like that..

If ice t and coco can't make it, nobody can.

We always thought those crazy kids would make it.

Why did Ice delete his tweets?

File under: Things To Consider Before Tweeting To 330,000 Followers.