Not good. The Internet in Syria has gone dark today as fighting intensifies in the capital city of Damascus. Telephone communications are reportedly blocked as well. 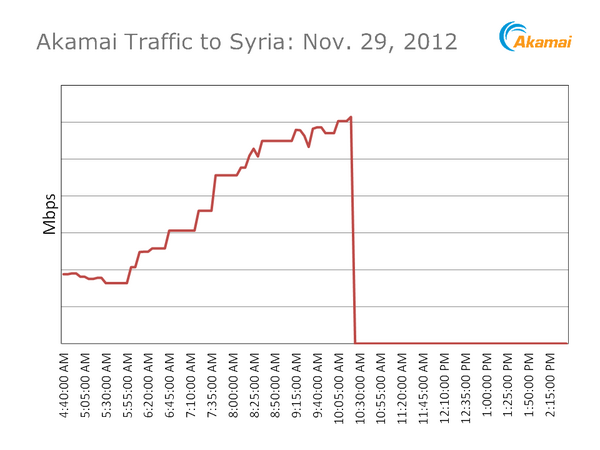 Phone lines & internet reported cut off in #Damascus. Imagine a regime that has to cut the phone in its own capital city. #Syria

Two hours ago the #internet was cut at least in most neighborhoods in #Damascus. This is troubling news. #Syria

No mobile networks n #Latakia whatsoever! this is the 2nd time 4 that 2 happen there, the 1st was when the regime shelled Raml Janobi #Syria

Again a total blackout on #Syria's two biggest cities #Damascus and #Aleppo. No phones, no internet and no electricity!

Syria has disconnected from the Internet. All 84 of Syria's IP address blocks have become unreachable, effectively removing the country f…

The Damascus airport is reportedly inaccessible and flights to the region are being canceled.

#Breaking: All roads to #Damascus airport are closed #Syria

Egypt Air and Emirates both cancelled flights to #Damascus due to fighting there as reports of Internet shutdown emerge. #Syria v/ @ASE

Reuters and the BBC report that telephone lines are working “intermittently” and mobile phone systems have been cut off.

Some Twitter users indicate that electricity has been cut or is working sporadically.

Landline still working in his area. Electricity cuts in 3 hr cycles. Sometimes only source of news is radio. Missiles still over bldg #syria