Larry Hagman, the actor who played the villainous J.R. Ewing on “Dallas,” died Friday at the age of 81.

Actress Barbara Eden worked with Hagman on the 1960s sitcom “I Dream of Jeannie,” and took to Twitter to remember her longtime friend and co-star.

Throughout various productions I had the pleasure of watching the Texas Tornado that was Larry Hagman. -Barbara

Eden also posted a tribute to Hagman on Facebook.

Barbara's message regarding the passing of Larry Hagman.

As I received the news this evening and as you read this I still cannot completely express the shock and impact from the news that Larry Hagman has passed. I can still remember, that first day on Zuma Beach with him, in the frigid cold. From that day for five more years, Larry was the center of so many fun, wild, shocking… and in retrospect, memorable moments that will remain in my heart forever.

He was such a key element in my life for so long and even, years after I Dream of Jeannie; our paths crossed many times. Throughout various productions I had the pleasure of watching the Texas Tornado that was Larry Hagman. Amidst a whirlwind of big laughs, big smiles and unrestrained personality Larry was always, simply Larry. You couldn’t fault him for it, it was just who he was. I am so thankful that this past year I was able to spend time with him and experience yet again ‘Larry’ in all his Big Texas bravado.

“Goodbye Larry, there was no one like you before and there will never be anyone like you again,” she wrote.

Other friends and fellow actors joined Eden in tweeting memories of Hagman and condolences to his family.

Oh no just heard about Larry , he was magnificent as JR & inspired me to play Alexis.RIP

My friend is taking a break. Pardon my silence. Love Patrick pic.twitter.com/oWNqx0k0 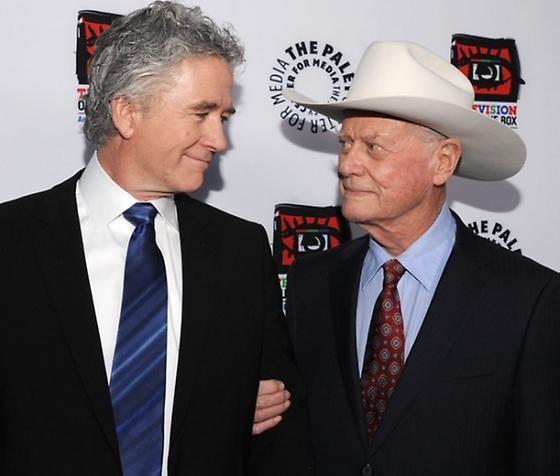 A friend and long time partner… the other half…RIP Larry Hagman…. your spirit will live long.

Just came down to civilization and heard about Larry Hagman, rest in peace. What a wonderful actor, honored to have worked with him.

It was truly an honor to share the screen with Mr. Larry Hagman. With piercing wit and undeniable charm he brought … http://t.co/FikhTSZs

So sad to lose such a wonderful dear bigger than life friend. Larry Hagman was one of a kind and will be with us all forever.

My thoughts and prayers go out to the family of Larry Hagman. My best, Bill

I'm shocked. Larry Hagman was a dear man who had an incredible career. He helped me to stop smoking. He really was a very special person.

So sad to hear about Larry Hagman's passing. A picture of me with "J.R." from years ago: http://t.co/1cJorGgx

So sad to hear about the passing of Larry Hagman. Sending love and respect to his family.

So sad 2 hear the news re the brilliant gracious extraordinary Larry Hagman. He will b missed. Sending love 2 all specially Linda & Patrick