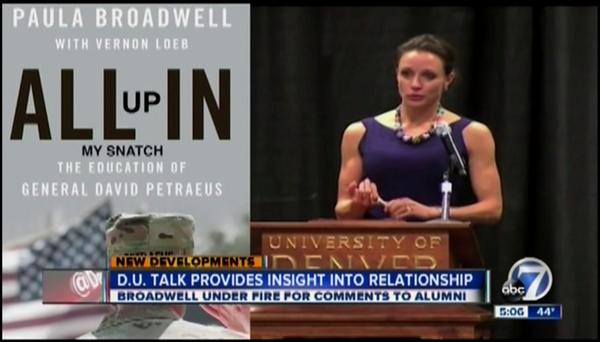 Broadwell’s Petraeus biography is actually titled “All In” (already unfortunate and snicker-worthy).

All In: The Education of General David Petraeus — the cover with Ms Broadwell's pic is suddenly deeply ironic! pic.twitter.com/FD2hbWpT

Top tip: When working in local TV, don't digitally alter a book cover to get smutty laughs in the office http://t.co/xkR9E9gy

“That’s correct,” said the women working the assignment desk, confirming that the wrong book cover had been aired. “It was a mistake.”

Google has no trace of "All Up in My Snatch" photoshop. May be a Denver ABC original http://t.co/nfAhAsCJ

We have a feeling that “mistake” is likely to cost at least one person.

The KMGH-TV news director claims, “The editor pulled the image of the book cover from the Internet without realizing it had been doctored