Sen. Sheldon Whitehouse does ‘not for a minute’ regret his rhetoric against Justice Amy…

‘Congrats on getting your victims hooked’: Not everybody’s joining Barack Obama on his…

Debra Messing explains why shooting of Ashli Babbitt was justified, Richard Grenell and others have…

‘But go ahead and keep losing, y’all.’ Kira Davis makes EXCELLENT case for why…

Needing a new target, the media pivots to Tucker Carlson and his commentary on January 6 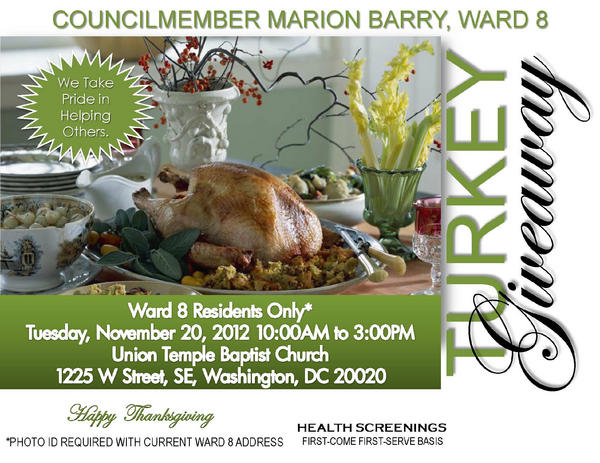 El oh fucking el. @marionbarryjr is giving away turkeys but only if you have a photo ID. What a racist.

A Twitchy reader reminds us that Barry has been a bit of a Thanksgiving turkey before:

@TwitchyTeam You guys do know that MBarry gave away turkeys few yrs ago&never paid the grocer who supplied them? Said they should be free.

Barry failed to pay the grocery store $26,000 for 2,000 turkeys by Monday, and Giant refused to accept the councilman’s assurance that he would have the rest of the money this week. According to Barry’s office, $17,000 of the funds had been raised and received.

So all those who went to Union Temple Baptist Church in Anacostia looking for a free bird Tuesday morning, it was a wasted trip.

‘Congrats on getting your victims hooked’: Not everybody’s joining Barack Obama on his O-care victory lap

Sen. Sheldon Whitehouse does ‘not for a minute’ regret his rhetoric against Justice Amy Coney Barrett concerning the ACA