There’s not much that brings the narcissist in chief to tears. The news of four Americans killed in Benghazi? Nah. The victims of Hurricane Sandy? Nuh-uh. His reelection to a second term? Aw yeah! 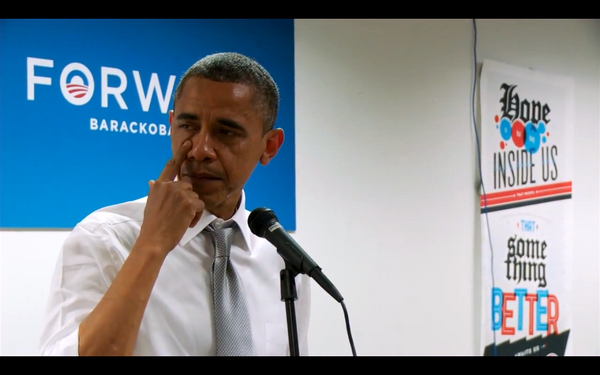 this is why i signed up for this: http://t.co/KqjiXBzG

Joe Rospars, the campaign’s chief digital strategist, “signed up for this” because he wanted to back a guy who blubbers over his own victory while addressing campaign staffers, but won’t shed a tear for the Americans murdered in Benghazi?

Naturally, his supporters swooned over the video anyway.

Here's a link again to that amazing President Obama speech, openly weeping as he talks to his campaign volunteers: http://t.co/szpwmryA

more evidence that @barackobama is an extraordinarily unusual president http://t.co/WU1sxrQD

to see Obama cry as he thanks his staff makes me respect him even more. incredible video –> http://t.co/ievnm4zT

I LOVE The fact that HE IS HUMAN…President Obama: "I'm Really Proud of All of You.": http://t.co/2j2ozYti via @BarackObama

A few days after the Benghazi attack, the White House released a photo to prove Obama was totally focused on security thingies. But did his team scrounge up a single pic of President “I Won” shedding a tear when he found out about the Americans murdered on his watch? Evidently, scrambling to lie to the public shuts that tear valve off pretty fast.

Obama releases crying video talking to volunteers. Where's the vid when he heard abt dead in Benghazi? http://t.co/GI3JZiiL @TwitchyTeam

Did Obama breakdown when he neglected 4 of his employees in Benghazi? Obama wipes away tears while speaking to staff – http://t.co/R2zgvn1X

@vanjones68 Think Obama teared up when he watched 4 heroes being murdered in Benghazi, or were they not worth tears? MSM polishing his apple

He’s not the only one crying.

Hey Obama, you know who else is crying? Ambassador Stevens' family.