Oh, for the love of everything ever! This is what happens when women vote with their lady parts, not their lady smarts.

My vagina voted for Obama, and he won! You're welcome. pic.twitter.com/n3FrOxDv 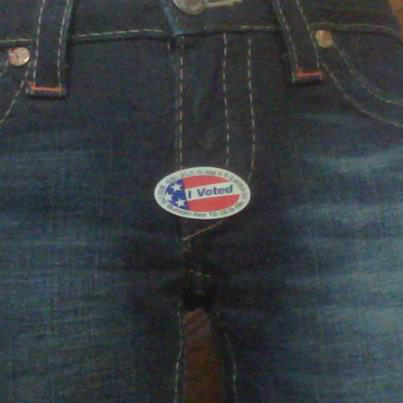 Liberal women aren’t just swooning over President Obama’s victory — they claim their vaginas, uteri and ovaries are expressing gratitude and relief now that they’re in the oh-so-capable hands of President Lady Parts.

Er … try cotton panties instead of synthetic. Bonus: they chafe a lot less than an Obama presidency.

My vagina thanks you too, Obama.

RT @iamcourtneyswan: For everyone who voted Obama, my vagina sincerely thanks you!

Me and my vagina are so fucking relieved! #OBAMA

I am so happy to have voted for Obama! I believe my vagina is thanking me now!

My vagina's so happy that it's going to continue to have rights! Yay #Obama !!

My vagina has never been happier #OBAMA #obama2012 #Obama4moreyears

Hey Obama, my Vagina thanks you for it's rights.

Yes, because as we all know, our rights come from our lord and savior Obama.

But it’s not just a slew of vagina monologues. Other liberal “lady parts” joined in the celebratory sighing.

My uterus had a deep sigh of relief last night.

I know it's certainly not the only issue on the table, but man did my uterus breathe a sigh of relief this morning.

My uterus is still super psyched about this whole Obama thing (not the whole Texas thing, though.

all i have to say is OBAMA, my uterus thanks you. 🙂

My uterus is so happy. And it isn't just because my period ended yesterday. #OBAMA

My uterus just let out a sigh of relief. It's my vagina not yours, please keep your politics out of it. #Election2012 thank god Obama won

Some femme-a-gogues even believe their biological clocks run on Obama time.

period didn't come last month at all, right after election results came in, period came. it's like my uterus knew it was finally safe #obama

Obama won last night. 20 minutes later, my period starts. My uterus is celebrating and would like to thank you for your decision, America.