Panic-porn FAIL: The Univ. of Illinois is a success story and a model for the nation’s schools.…

U.S. Senate candidate Linda McMahon is running on the Republican and Independent lines, and she and her husband have donated $150,000 to a pro-Romney super PAC. But earlier this week, a doorhanger apparently paid for by her campaign urged citizens in Connecticut, “Vote Barack Obama For President and Vote Linda McMahon For U.S. Senate.”

Today, her campaign is reportedly taking it one step further by distributing this sample ballot: 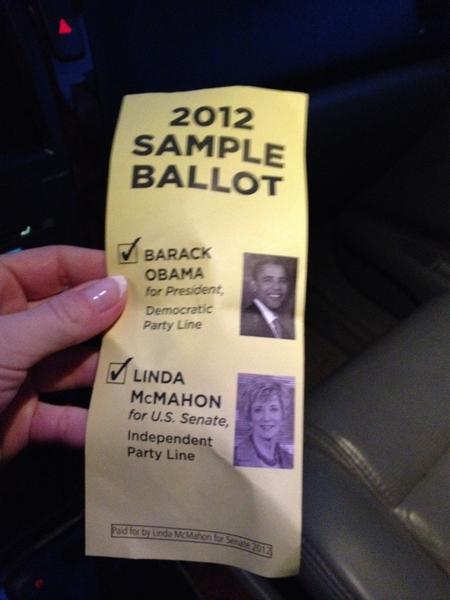 Photo of Linda McMahon sample ballot may break the Internet.

Politico reporter Kate Nocera was unable to confirm where the sample ballots are being distributed.

@DarylHerbert I'm not sure where they are passing them out. At the bottom it says "paid for by Linda for Senate"

In Connecticut? That ain't so dumb… RT @daveweigel: RT @KateNocera: The sample ballot McMahon is passing out: http://t.co/5NWCfuGO

Or not so savvy?

At this point on Election Day, all we can do is laugh.