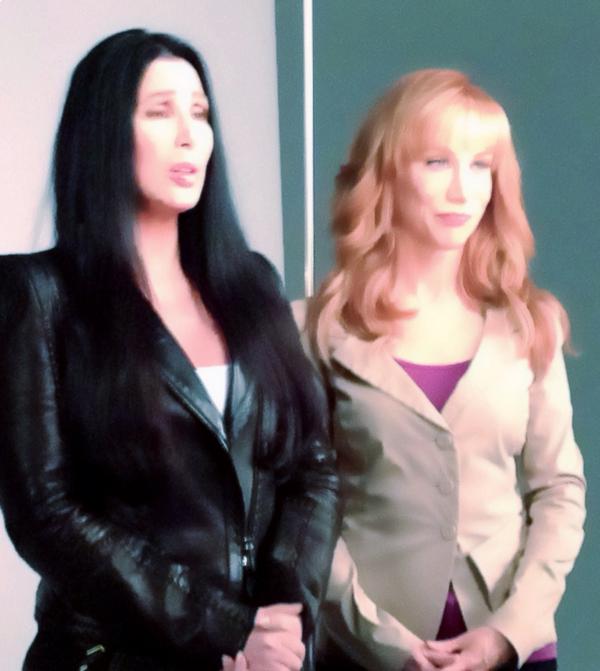 What were unhinged Obama cultists Cher and Kathy Griffin doing together when Griffin thought, “Fk bitch ur Dumb”? If Cher is to be believed, they were recording public service announcements for President Obama.

Are we talking “drugs are bad, mmkay”-style PSAs? Or did the Obama campaign actually recruit anti-Mormon bigot Cher for campaign spots? As with all things Cher, it’s not really clear. But either way, great choice, Mr. President! We’re not sure if this is a step up or down from Eva Longoria.

But it wasn’t all fun and games for Cher. Evidently, the script she was offered just wasn’t right for her. What she really wanted to do was perform a live-action version of her cuckoo Twitter rants.

I’m dead ! Kathleen & I did psa’s4 Pres. Obama ! We did 2 together & then I did one by myself ! They had written something but it wasn't

Right for me, I wanted to talk about things you don’t hear everyday! Like “ in 31 states a rapist has visitation rights with the child of

Of that rape, which gives him access to his Victim ! In some instances the felon has petitioned the court for custody of the child! Can u

IMAGINE THE HELL! THE TRAUMA!THE FEAR OF HAVING TO SEE THE MAN WHO RAPED U.. For 18 yrs of your life! To have to see him TOUCH YOUR CHILD !

I’m Not Open & I Don’t CARE! When I read INSANE THINGS THESE RIGHT WING NUTS HAVE DONE 2 WOMEN & WHAT THEY’RE TRYING 2 DO,I COULD SCREAM

Oh, no! How did Cher catch on to the fact that all of us wingnutty wingnuts are dying to force rape victims to share custody of their kids with convicted rapists? Clearly right-wingers don’t care about rape victims as much as Cher, who once tweeted that it would be karma if Todd Akin got raped by a man with HIV.

Apparently Cher was shocked that she wasn’t allowed to go into meltdown mode on behalf of the president.

Still, Cher is feeling pretty darn optimistic about Election Day and she’s hopeful she won’t be forced to “cry FOREVER.” But if things don’t go her way, she’s got a contingency plan.

She won’t be the only one packing. Bon voyage!

Here is the actual PSA, made for actually.org and funded by the Jewish Council for Education and Research, an Alexander Soros-funded super PAC.