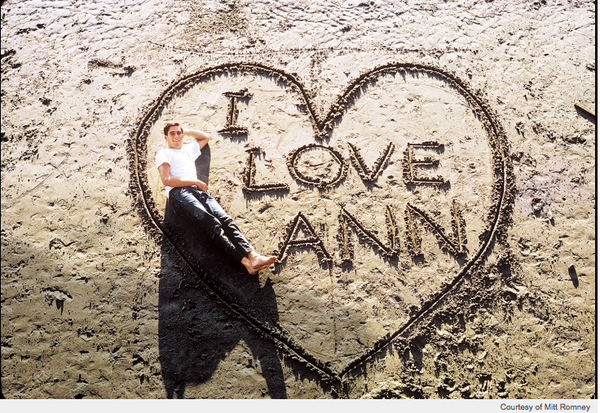 Well, that oughta put a dent in the “Romney is a heartless monster” lapdoggery pushed by the liberal press.

Time dug up this achived photo of a young lovesick Mitt wooing future wife Ann. And woo he did:

[A]round 1968, while serving as a Mormon missionary in France, a young Mitt made several photographs with the help of his LDS friends. He described how the photo was taken,  explaining that it was playfully staged for his high school girlfriend and soon-to-be wife, Ann Davies. Romney revealed that the photo is actually one of a series made during his time abroad.

And this photo (from 1968) is why more married woman love Mitt Romney…his devotion to his wife and boys. pic.twitter.com/qjEZMfgo

I just starting loving Mitt just a bit more. Men…learn from him. This is fantastic http://t.co/KZ8Ogg2p via @jdickerson

Photo from 1968 of Mitt wooing Ann. So sweet!!! The photos that fueled young Romney romance http://t.co/UUsbmCws via @TIMEPictures #teaparty

In case you missed it. Whether Mitt wins or not, one thing is certain. Ann Romney won the man lottery. http://t.co/KZ8Ogg2p #tcot

Just a great picture on so many levels. "The photos that fueled a young Romney romance" http://t.co/U4gqTW5X.

SO CUTE! –> Send Your Own Mitt Romney Love Note http://t.co/gleNiZsD via @buzzfeed

But never mind the heartwarming, romantic “awwww” factor. Romney was clearly a total creepster, according to this HuffPo editor.

Surprised Ann Romney didn't file for a restraining order when she saw that "I LOVE ANN" photo.

Aw, did Time interrupt your frantic preparations to visit the “it tasted like chocolate” plaque where the Obamas shared their first kiss?

The desperate attempt to spin the adorable photo as a mark against Romney continues with typical Mormon bashing and rehashing of the failed “draft dodger” attack:

Mitt Romney was a mormon missionary in France, but it's ok cause he had a cheesy romantic side (photo included) http://t.co/0bR0TETM

You know that "I Love Ann" photo of Romney on the beach in France? That was taken while he was dodging the draft.

@time you mean the I love Ann picture was photographed when Romney was dodging the war. NOT [email protected]

Romney decides to try to appear to have a functioning human heart, releases record of his sexts to Time Magazine: http://t.co/dQo3n6ML

You know Mittens is getting desperate when he releases a pic as personal as this to the press: http://t.co/v4HwpxNI

Um, no. What part of “we found a surprising photo in the archive” confuses you?

We found a surprising photo in the archive — a photograph that illustrates Mitt Romney's other mission: romance | http://t.co/K6JFYjeI

Reading is hard. And so is realizing