The U.S. State Department used Twitter to warn of “large crowds and other gatherings that might turn violent” in Indonesia Monday.

News you can use … or could have used before a violent mob armed with Molotov cocktails, rocks and sticks launched an assault on the U.S. Embassy in Jakarta. The rioting began several hours before the State Department’s Twitter warning.

Eleven police officers were hospitalized after being pelted with rocks and attacked with bamboo sticks, said Jakarta Police Chief Maj. Gen. Untung Rajad. Four protesters were arrested and at least one hospitalized.

Protesters burned a picture of President Barack Obama, who spent part of his childhood living here. They also tried to torch a fire engine parked outside the embassy, ripping a hose from the vehicle and igniting it, which sent plumes of black smoke billowing skyward.

“We will destroy America like this flag,” a protester screamed while burning a U.S. flag. “We will chase away the American ambassador from the country.”

Tweets about the escalating riot appeared hours before the State Department’s tweet.

Some images of the violence in Jakarta:

The protest spread! US flags burned by protesters in front of US embassy in Jakarta. pic.twitter.com/w3ECWyfM 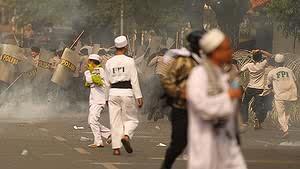 In front of US Embassy Jakarta .. pic.twitter.com/skO1OKJk 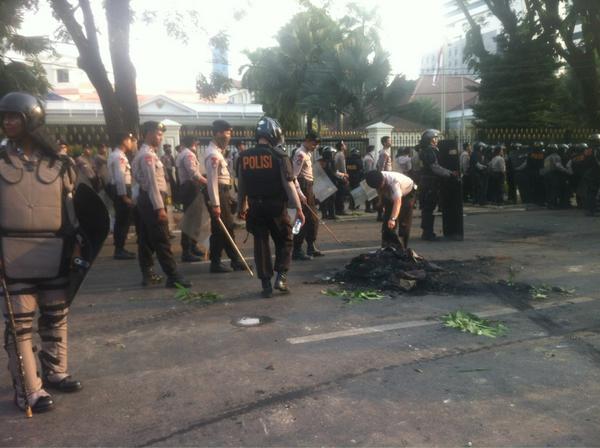