A UT official told the American-Statesman that the university had received multiple bomb threats to multiple buildings.

The school posted this emergency alert on its website:

Evacuation due to threats on campus. Immediately evacuate ALL buildings and get as far away as possible. More information to come.

UPDATE: UT officials said in a statement a male with a middle eastern accent called in a bomb threat. http://t.co/fAJRiOsP

UT Austin officials released a statement saying the man with the Middle Eastern accent claimed he “was with Al Qaeda and these bombs would go off in 90 minutes.”

MORE on evac from University of Texas: U official told Austin @statesman that they "received multiple bomb threats to multiple buildings."

A #UT spokeswoman said they received bomb threat about 8:35 a.m. from caller claiming to be with #alQaida: http://t.co/iSV4XMSt via @ap

UT Austin is reaching out to students and employees via Twitter:

Evacuation due to threats on campus immediately evacuate all buildings get as far away from the buildings as possible. More to come.

Buildings being checked/cleared. Stay away from buildings. No decision on afternoon classes/activities. Next update at 10:45am.

North Dakota State is also evacuating due to a bomb threat:

The campus of North Dakota State University in Fargo is being evacuated this morning because of a bomb threat.

An emergency message sent out to students and posted on the university’s website this morning ordered all students and employees to leave campus by 10:15 am.

From the emergency message:

NDSU is requiring all employees and students to leave campus by 10:15 a.m. This includes residence hall students, who, if necessary, should walk to locations off campus. This also includes the downtown buildings and agricultural facilities.

NDSU campus was to be evacuated by 1015 central but a reader saying there are still a lot of people trying to get out. 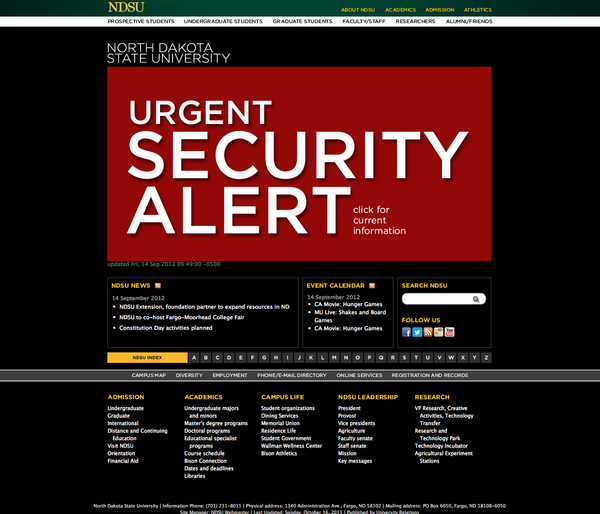 Buildings at UT Austin are being checked and cleared.

UT EMERGENCY UPDATE: continue to stay outside buildings, they are being checked and cleared. Next update will follow shortly.

Time specified in phone threat has passed but we have not yet cleared all buildings. Decision to resume operations&classes will come shortly 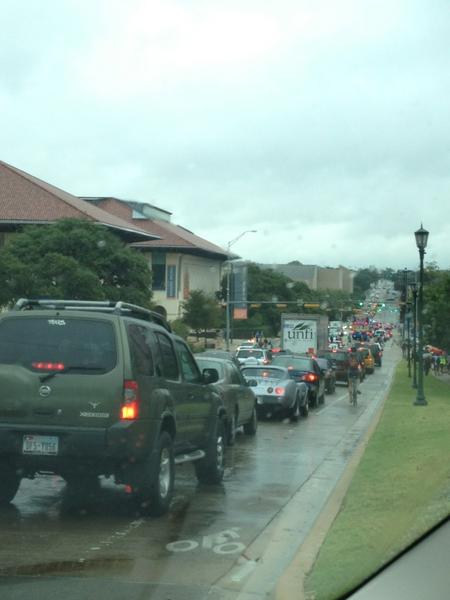 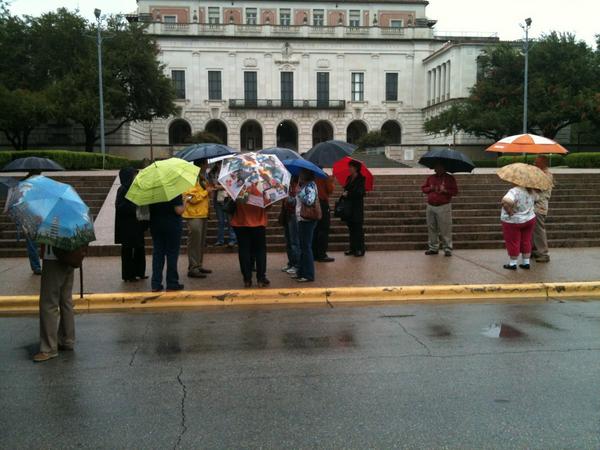 At #UTAustin for evacuation now, hundreds of students, faculty staff seen standing on corners awaiting when they can return. 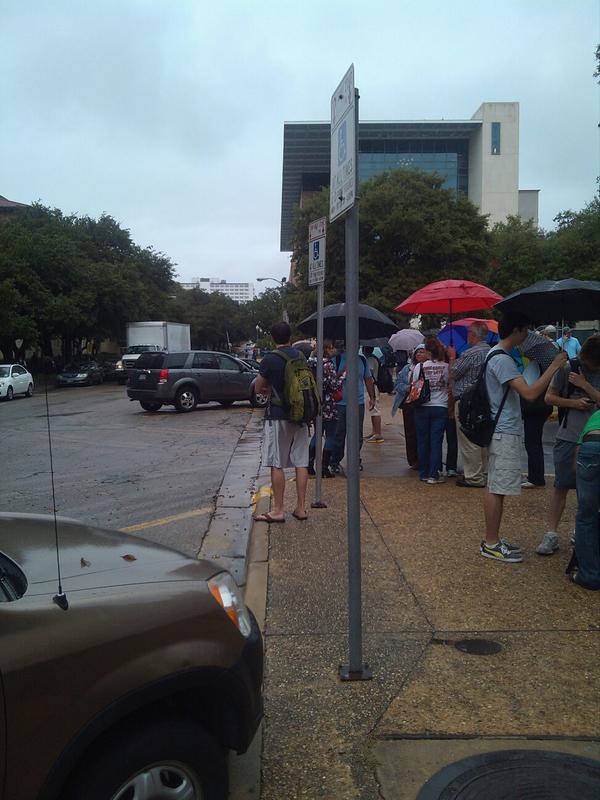 The scene as #UTAustin evacuate to the safety of Starbucks lattes. There must be 200 people in here. pic.twitter.com/WlbZ2l9I Does the UT Austin mobile phone app need some updating for emergency situations? 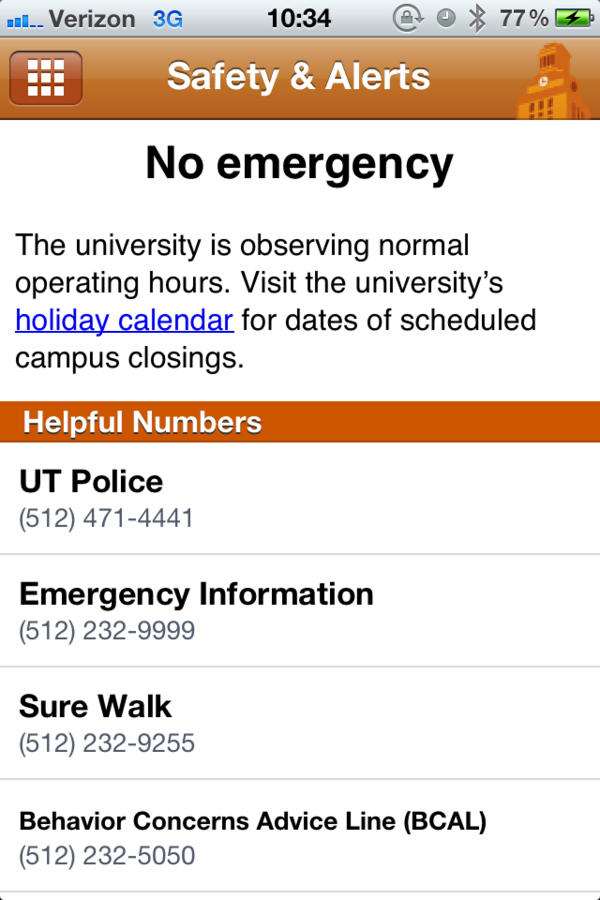 Hyde Park Baptist Schools in Austin are now in lock down.

“Hyde Park Baptist Schools are currently in lock down, until further notice. All students and staff are in proper places and safe.

The Statesman reports that no reason has been given.

The time of detonation given by the person who called in the UT Austin bomb threat has passed, but officials are continuing to check the buildings.

Time specified in phone threat has passed but we have not yet cleared all buildings. Decision to resume operations&classes will come shortly

A third campus threat at  Valparaiso University in Indiana:

Wow, also an "unspecified threat to campus" at #Valparaiso University in #Indiana during "chapel break" time, around 11:15 AM Central.

Valparaiso U.: An unspecific threat to campus was made through a graffiti message alluding to dangerous & criminal activity

Valparaiso University has posted a campus alert about potential danger during chapel break period, which happens at 11:15 Friday.

The alert, posted early Friday, says “an unspecific threat to campus was made through a graffiti message alluding to dangerous and criminal activity alleged to be carried out during the chapel break period on Friday.

“The broad threat provided no details with respect to location or type.

The campus is not being evacuated as authorities investigate.

More on the UT Austin situation:

UTexas-Austin will remain closed through afternoon after series of threats claimed #alQaeda planted bombs across campus.

The LBJ Library & Museum is closed for the remainder of the day as a result of the bomb threat @UTAustin.

Classes at UT Austin have been canceled for the remainder of the day.

All activities except classes will resume at 5 p.m. Buildings may be reentered at noon. Today's classes are cancelled.

BREAKING- An "ALL CLEAR" was given moments ago for the @UTAustin campus. The school received a bomb threat this morning. #CNN

Some students are less than pleased with the school’s response to the threat.

Wait…the call came in at 8:35 am and UT didn't evacuate students until 10:00 am. What the heck? #UTBombThreat 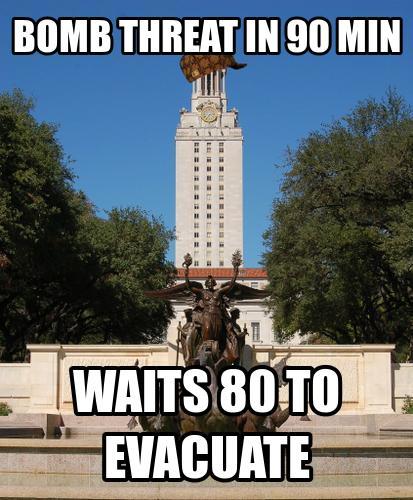 Twitchy will monitor the situation and update with breaking developments.

UT president Bill Powers held a press conference was held to update media on the situation:

“Thank you all for your patience,” UT President Bill Powers said as he entered the AT&T Center for a news conference. “We’re safe.”

Pres. Powers: We had a threat of explosives of campus. This threat was given for later in the morning. We thought prudent to clear bldgs.

#UT Pres Powers clarifies that it wasn't a campus-wide evacuation. The goal was to get students out of buildings.

Pres. Powers: We are confident working with our officials, city, state and federal that we are able to resume operations.

Pres. Powers: We are confident that campus is safe. This was a joint effort and blessed with local, state, federal officials help.

.@UTAustin President Bill Powers: "We're extremely confident that the campus is safe. We are allowing people to go back into buildings."

Bill Powers says UT has been working with local, state, federal officials on the call. Caller hasn't been ID'd or detained to his knowledge.

UT president: delay in text following threat was so officials could assess threat.

UT prez says 75 minute delay on evac order was to have time to evaluate threat. That left 15 minutes for many thousands to evacuate.

The police chief spoke as well:

UT Police Chief: Threat was given for several buildings. Started working with several agencies on phone number and began working.

#UT police chief: texts and sirens as well add social media and Web utilized to put out word of threat

Police presence on campus is dissipating:

I'm seeing faculty, staff at #UTAustin heading back inside their buildings. Many of UTPD vehicles have cleared scenes. #hookem