‘Yeah, THAT’S the ticket!’ Jon Lovitz takes on HORDE of STUPID after sharing story of…

Trump was ‘too dangerous’ but THIS is ok?! Andy Ngô shares screenshot of blue-check Muslim…

‘We have a SHADOW president’: Richard Grenell gets BRUTALLY honest about far-Left’s…

Thanks? Dr. Anthony Fauci says ‘if you’re vaccinated and you’re outside, put aside…

‘If you believe her, you’re the mark’: Charles C.W. Cooke exposes Florida COVID-19…

Pollsters admit they were hot garbage across the board in 2020

Who could resist NBC’s Al Roker? No one, obviously, but you might think twice about shaking his hand after hearing his TMI tale of gastric distress in a White House restroom. But it looks like both President Obama and Vice President Joe Biden are totally into the Today show host, and his colleagues in the news business have taken notice.

He did it again! Has to be some kind of record.. Obama points out @alroker for the second time in two Inaugural parades. #nbcpolitics

Only @alroker @todayshow could get both Obama AND Biden to stop along parade route! #nbcpolitics

"This is so exciting," @alroker says. He also gets a handshake from @VP Joe Biden.

MR. PRESIDENT: @alroker after getting a thumbs up from @barackobama. pic.twitter.com/BQZLIUeK 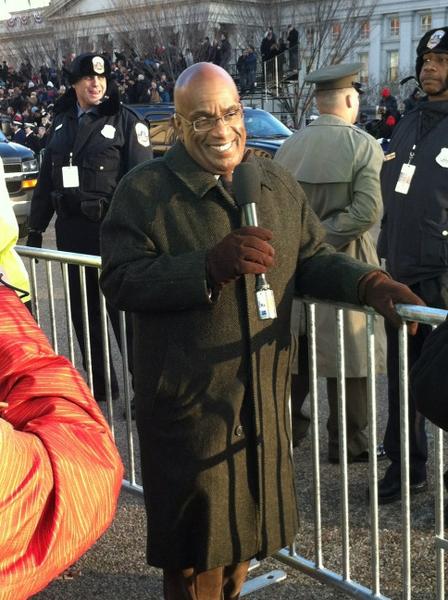 @brianstelter @StephLauren he certainly looks like he's having fun! we'll have vid of the moment soon.

Hey @alroker, let's do the job trade for a day!

Reviews for Roker’s special moment with the president and vice president were mixed: was the moment perfection itself, or merely badass?

Al Roker just did the coolest thing in this presidential parade. Joe Biden ran over and shook his hand. Perfection. #nbcpolitics

#alroker is what i meant!

Al Roker is my hero. Dude got Bro Biden to come shake hands with him at the inaugeration, then literally dropped the mic and walked away.

Al Roker just got a handshake from the VP, dropped the mic and walked off. #perfect #nbcpolitics

Al Roker is the man. Got responses from Obama and Biden while they were parading!!! Roker dropped the mic afterward #sexualchocolate

Got an "interview" with the President and a handshake from the Vice President pic.twitter.com/jsqiOUXw

This next photo is a close as we can bring you to actually being Al Roker. Savor it.

A few years from now, we'll hear that Joe Biden crapped his pants while talking to Al Roker and the loop will be closed.

You've GOT to love @alroker for his amazing interview with the president! ; )

So, what was said in the first interview of Obama’s second term?

.@AlRoker just had the first interview with the newly inaugurated president. "How's it going?" Roker shouted. "It's going great!" Thumbs-up.

Wow. This was the television moment that will never, ever be topped. For decades, people will ask, where were you when Al Roker and Joe Biden shook hands. Wait, what’s that?

I think the Obama girls taking pictures of their parents kissing just beat out Al Roker for best TV moment of the afternoon.

Trump was ‘too dangerous’ but THIS is ok?! Andy Ngô shares screenshot of blue-check Muslim actress straight-up quoting HITLER about Jews

‘Yeah, THAT’S the ticket!’ Jon Lovitz takes on HORDE of STUPID after sharing story of Canadian man bragging about NOT working because govt pays him