If the Minneapolis Star Tribune wanted to get the Derek Chauvin trial jurors killed, what would they be…

Hot DAMN, so much this! Geoffrey Ingersoll BLISTERS the Left in brutal thread about their…

Can the White House please explain when President Biden has to wear two masks and when he does not?

Oh, there’s a picture attached? He isn’t, is he? 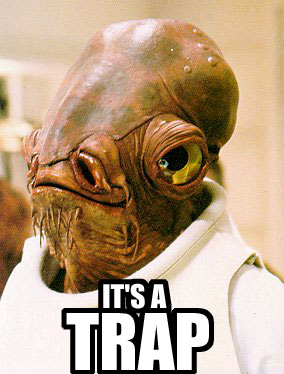 Twitter announced today that all 100 members of the Senate and 90 percent of the House membership have Twitter accounts, and it looks like many of our representatives are getting the hang of this social networking thing, what with dueling hashtags like #My2K and #SpendingIsTheProblem. To be honest, we didn’t think Charlie Rangel was the type to use a Star Wars meme to argue against the GOP’s offer of a three-month debt ceiling increase in exchange for a Senate budget, but we learn something new every day.

How do Rangel’s followers feel about his office dragging Admiral Akbar into America’s budget mess? Reviews are mixed.

@cbrangel I have a solution: LIVE WITHIN YOUR MEANS.

Congressman Charles Rangel won Twitter for the day: 'It's a trap' http://t.co/T9EOzr9d

@cbrangel A long-term solution is to CUT SPENDING!

Will the Force be with the GOP in the debt ceiling battle? It looks like we’ll find out next week.