AP Stylebook says the term ‘mistress’ is no longer appropriate

News crews are just beginning to look into reports of a shooting at the Vista Ridge Mall in Lewisville, Texas, but tweets from people on the scene give an early picture of the panic that ensued. Some are reporting a suicide, while others say police were involved.

Lord bless the man who just shot himself in vista ridge mall.

According to @mariahvarg, a man just shot himself in the head in front of kids at the Vista Ridge Mall in Lewisville, TX.

@NBCDFW talked to a worker inside the vista ridge mall in lewisville – confirms she heard the shots, shut down her store, heard officers.

Local news sources are reporting that a man who was being escorted away from the mall by security following a domestic dispute shot himself. No one else was injured.

#Lewisville PD saying shooting started as a domestic, a man was being escorted out after altercation w spouse and shot himself. @NBCDFW

UPDATE: Shooting at #VistaRidge is a suicide. PD say man shot himself while being escorted out by mall security.

Apparently there was a shooting at Vista Ridge Mall within minutes of George, Trey and I leaving! Thank you Jesus for protecting us!

I live down the street from Vista Ridge. It's scary that these types of things happen so close to home. ?

Just heard about the shooting at Vista Ridge Mall. I pray no one got killed or injured. This is just such shocking & disturbing news.

Driving to lewisville, saw three helis hovering. "What if there was a shooting at vista ridge?" *checks twitter* #holyshit

Here’s a photo taken at the scene. 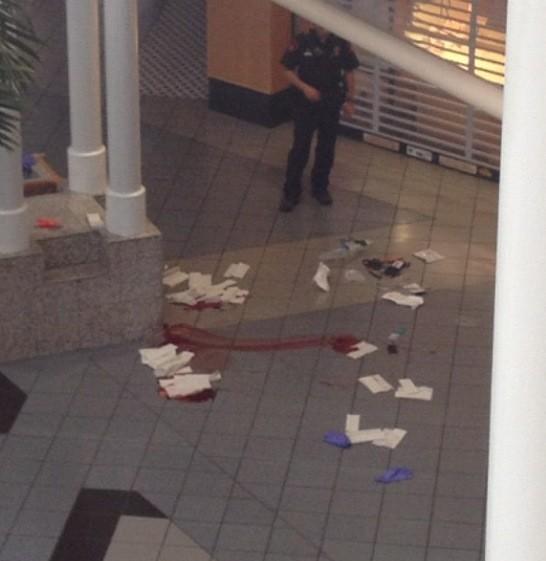 Twitchy will monitor the situation and update as details are available.

Update: CBS Dallas-Fort Worth is reporting that the man has died at the hospital. He reportedly had a fight with a store employee and shot himself with a gun concealed in his clothing as he was being led away by mall security.

UPDATE: Lewisville police say shooting inside Vista Ridge Mall was a suicide. One man dead, no one else injured. http://t.co/aXJP7kLC