That Newark, N.J., Mayor Cory Booker is planning a run for Senate is the worst-kept secret in politics. Enthusiastic Twitter followers who ask what they can do to facilitate a campaign are simply directed to the mayor’s website to sign up, like so.

Haven't started yet but please sign up/register at http://t.co/DV15nPNr RT @RoseTintedVisor You still taking volunteers on your senate team?

But will Sen. Booker continue to engage constituents on Twitter like he does now, responding to each and every request to fill a pothole, give you a weather report for the ice show or drive by your house to investigate a suspicious kid on a bike? Booker says yes, he will, but is that even possible? What happens when the demands from residents to replace their spoiled food due to a power outage multiply by a factor of 32? Even Barack Obama, President of the United States of America, had to admit “you can’t change Washington from the inside.”

Booker thrilled his fans by living on a food stamp budget during the week-long, high-profile #SNAPChallenge, but how about the much lower-profile 47 Eastern Parkway tree stump challenge, which also took place in mid-December?

@CoryBooker @RonaldCRice @Newark4311 My challenge to the Mayor, get removed from 47 Eastern Pkwy. before 2013. pic.twitter.com/tNBIwlml 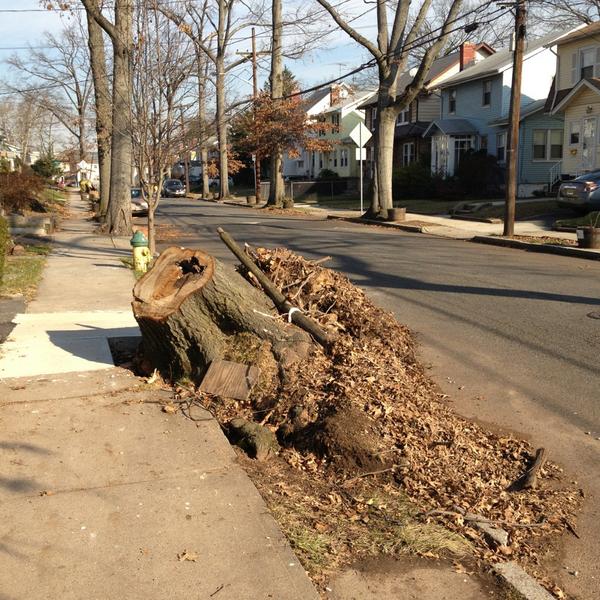 I accept that challenge RT @phdscawatson: My challenge to the Mayor, get removed from 47 Eastern Pkwy. before 2013. pic.twitter.com/giqVk5LB

So, can one man change Eastern Parkway from the inside?

Chris, as Karim informed u, we have to follow FEMA procedures to remove so its taking a little longer. Sorry to let you down. @phdscawatson

FEMA? Didn’t President Obama back in November direct federal agencies not to say why they couldn’t do something to help Sandy victims but rather figure out how they can? Something about, “No bureaucracy. No red tape”? Isn’t there some way to blame this stump on Bush?

Even Supermayor needs a hand now and then.

@CoryBooker @phdscawatson any updates on the tree stump? @fema maybe @GovChristie can help?