It didn’t take long for that national conversation on guns inspired by the Sandy Hook Elementary shootings to turn into a week’s worth of closed-door meetings in Washington, and according to NRA representatives, the conversation was more of a lecture.

As Twitchy reported earlier, Vice President Joe Biden said this week’s meetings with his gun task force were not a photo opportunity, but the White House did manage to sneak out a couple of pictures today, including one from this afternoon’s meeting.

NRA "disappointed" after Biden meeting, with stern-faced people to prove it in official photo http://t.co/SBl7Z3HT 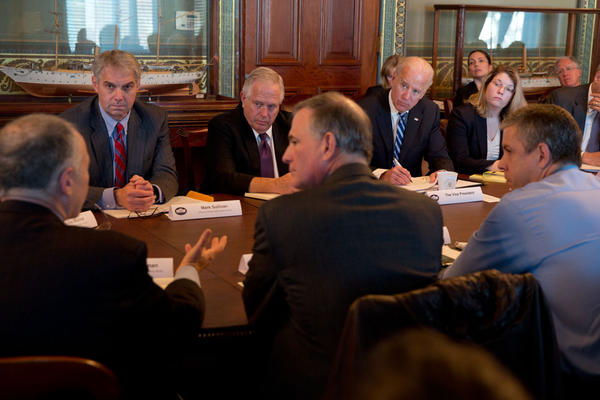 In a statement released after the meeting, the NRA stood its ground (no pun intended) on gun rights.

"We will not allow law-abiding gun owners to be blamed for the acts of criminals and madmen," says the NRA statement.

NRA says it will now turn to those in Congress who are "interested in having an honest conversation" about restraining gun violence.

Post-Biden mtg, NRA says it's "disappointed w/ how little this mtg had to do with keeping our children safe…" (1/2)

Biden & #NRA agree to disagree after their meeting on gun violence today. NRA says it's "disappointed." Biden to present proposals by Tues.

NRA says Biden's task force is about attacking the 2nd amendment. so… consensus might be hard to reach.

With the NRA already being blamed, quite literally, for the deaths of 20 children in Newtown, Conn., as well as being the target of several petitions to declare it a terrorist group, there’s little chance for the gun rights group to win many public relations battles, and it doesn’t look like it’s going to try. Rather, it will do what it does; defend the Second Amendment. In the meantime, the media, Hollywood and anti-gun activists will continue to do what they do.

American Federation of Teachers president Randi Weingarten is on board with Charles Blow in his assessment of the NRA as a pro-proliferation group. “Groups like the NRA aren’t as much about rights as wrongs. The money being churned is soaked in blood and marked by madness,” Blow wrote in yesterday’s New York Times.

So disheartening to hear of another school shooting. @VP Biden will talk gun safety with NRA reps today-what do you think needs to happen?

The NRA is two public statements away from hauling off and shooting everyone who says guns are to blame for violent crimes in America.

The NRA is going to drag out every lie, every fear tactic, every fabrication to play on gun owner's paranoia in this latest episode.

The NRA could care less about 20 dead kids…they just flat out don't give a damn. They only care about gun sales…period.

@Hardball_Chris Ok the NRA had their chance to be safe. Now they should be hit by a truck!

Today's @NRA message to the world: 'SCREW YOU'.