PNC Bank has been emailing customers today warning them of what appears to be a cyber attack on its online banking system.

Interesting: just received an email from PNC Bank (my bank) stating "A number of banks in the U.S. are under a cyber attack" #FiscalCliff

According to PNC Bank a large number of financial institutions seeing attacks, resulting in DOS. Keep an eye on your statements.

For better or worse, I only have one bank so I can't tell if #PNC is being proactive or overreacting re: cyberattacks? pic.twitter.com/VvCNMk6z 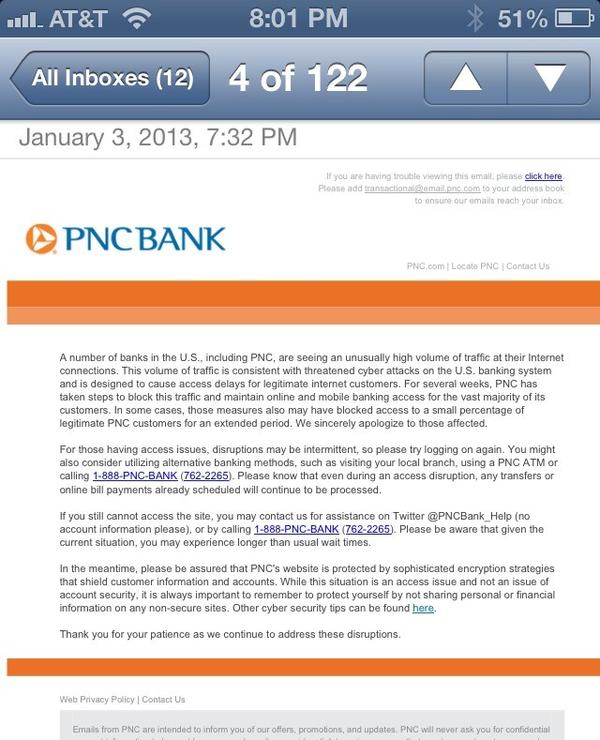 Wow, @PNCBank_Help issued email about DDoS-type "cyber attack" affecting them & other US banks. Sucks, been there! Hang in there!

PNC Bank is under a cyber attack. Making me not want to pay bills even more. http://t.co/DoNCIo1u

@PNCBank_Help – Why so many issues with online & mobile banking lately? Making a lot of customers quite nervous. Very frustrating!

SWEET..I cant log into my PNC online banking bc of foreign cyber attacks..why r there so many foreign nerds pissed at us right now #getalife

The Pittsburgh Post-Gazette reports that PNC and other banks were threatened in December with a denial of service attack in retaliation for — wait for it — an anti-Muslim YouTube video.

This week marked the fourth in a row that customers of Pittsburgh’s biggest bank reported intermittent problems accessing their accounts.

Problems began Dec. 11 after a group called the al-Qassam Cyber Fighters threatened a round of denial-of-service attacks against PNC and a handful of other big banks by flooding their websites with communications requests. The group has said it is seeking the removal of an anti-Islamic YouTube video from the Internet.

"Qassam Cyber Fighters": Bank officials "must expect our massive attacks! From now on, none of the US banks will be safe from our attacks."

Supporters of the Qassam Cyber Fighters are claiming that the group has disabled public access to the websites of PNC Bank and Wells Fargo.

Just got an email from PNC telling my my online banking may be interrupted due to potential cyber attacks on the US banking system. Yikes.

Is anyone else getting a little nervous?