A Miami television reporter and his cameraman made a dramatic run for it yesterday after a firearm was drawn in the middle of story about a murder.

CBS Miami investigative reporter Brian Andrews was interviewing the family of a woman who was shot multiple times outside a pharmacy in Little Havana. When a truck similar to that driven by the woman’s ex-boyfriend drove past, a family member pulled a gun and Andrews dove over the backyard fence.

Jumped a fence to get away from chaos and drawn guns while covering the news tonight in miami http://t.co/zugwBsPJ 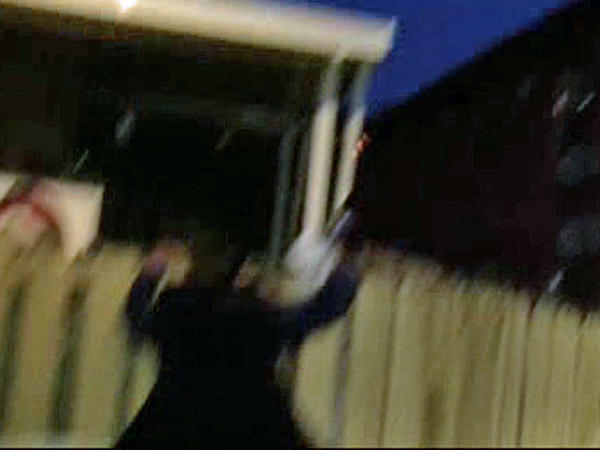 @lizroldancbs4 @erodcbs4 @cbsmiami @brunopgiglio Woke up this morning and realize I landed on my back the wrong way. Motrin Saturday 🙁

Cameraman Bruno Giglio caught the entire incident on tape, but didn’t quite make it over the fence.

@DJBlackMamba I think they were both family members of the victim, they thought they both saw the pickup truck of the killer pulling up.

@DJBlackMamba The woman just kept screaming at him in Spanish, "Don't shoot! We don't know who's in the truck!"

@BrunoPGiglio Your boy just hopped that fence and left you behind! Way to keep your cool and keep rolling. Good work dude.

@chancehorner Thanks! It was more of a issue of him being a lot more fit than me. I'm too fat to jump fences with a camera.

@NewsCarolyn It was good TV

Video of the incident can be seen on CBS Miami’s website.