In what many are calling a preview of the vote to allow the Bush tax cuts to expire for those with incomes over $1 million, the House tonight passed a spending reduction plan, but just barely. 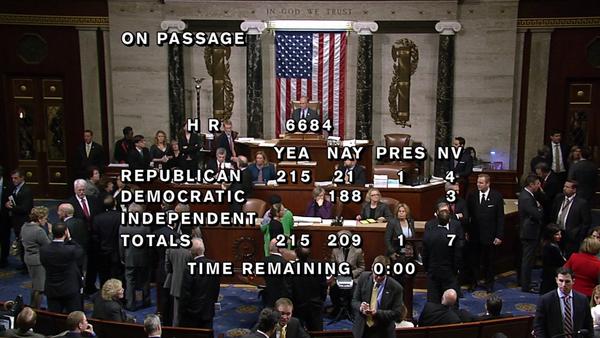 House votes 215-209 for step one of "Plan B," a bill that cuts spending & averts some military spending cuts

Republican sequestration replacement bill comes down to the wire! Passes 215-209 with 22 GOPers breaking rank, voting 'no.'

Ruh roh. Factoid from @jamiedupree the spending cuts bill that just barely passed lost 5 gop votes since last vote on it in May

The vote on a tax hike for those making more than $1 million is expected soon. House Speaker John Boehner has been trying to promote the idea that no amount of tax hikes will fix the economy, even pushing a Twitter hashtag, #SpendingIsTheProblem.

What did pass was the "sequestration" revision bill that would have shifted cuts from defense to social spending.

Within minutes, the White House had promised a veto were the legislation to pass the Senate, an outcome which also seems unlikely.

Minutes after the House passed the sequester replacement bill, the White House officially threatens a veto

Time for a huddle.

Spotted: Eric Cantor and entourage walking into Speaker Boehner’s office. Wonder if they’ll chat about that troublesome Plan B vote…