Clackamas Town Center, a mall in Portland, Ore.,  began trending on Twitter this evening, alerting many that something must be wrong.

Clackamas Town Center is trending. I hope everyone is safe. 🙁 I'm thankful that I didn't go there today.

holy shit. Clackamas Town Center is trending worldwide. That's my mall. To think I was going to be at the mall about this time…

Early reports say at least two people were killed, and as many as 60 shots were fired inside the mall. Tweets from inside the mall tell a chilling story.

Trying to evacuate. Oh my god this is terrifying (@ Clackamas Town Center) http://t.co/IIJj84Ym

This is the most terrifying thing I have ever witnessed

Well, I’m alive, but the shots were close enough that I felt the air pressure change on my neck. Clackamas Town Center.

I just ran for my life. There's shootings at Clackamas Town Center Mall

A picture sent to us of a group taking shelter inside Clackamas Town Center after shooting. #ClackamasShooting. pic.twitter.com/3v79u4on 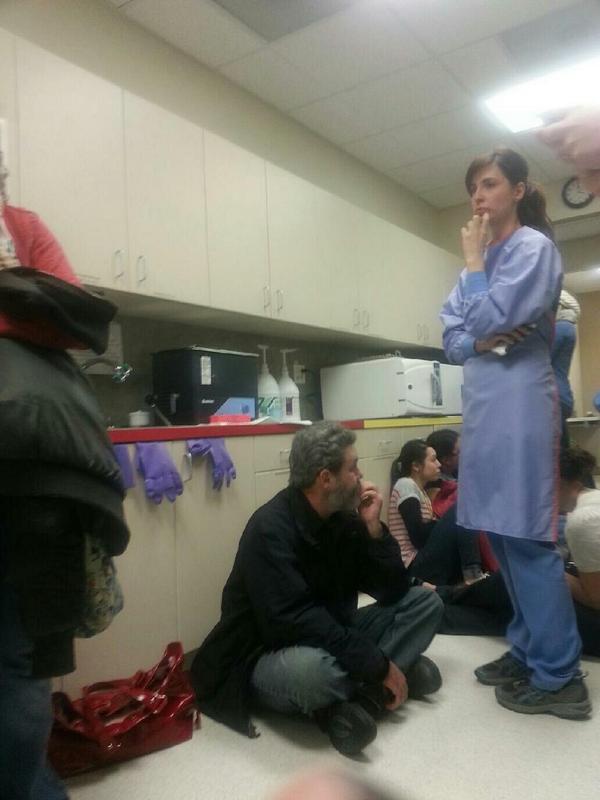 I am at Clackamas Town Center where panicked people are running from mall. Witness tells me shots fired.

Police have established a perimeter, have weapons drawn, and are blocking exits.

Multiple agencies here. Lots of very emotional people. Tough to get details but one person tells me it was an automatic weapon

Nordstrom employee tells me the shots were fired near the escalator by the food court. Automatic weapon.

Mall employee tells me security ordered cages down for all stores.

Mass shooting at the mall across the street from my apartment #pdx pic.twitter.com/Itk5INPv

A guy with a machine gun and a mask shot people @ the clackamas mall. Scary thing is that my dads gf and her sister saw the guy. #scary

Prayers and best wishes for those on the scene began pouring in immediately.

New reports say the shooter was wearing camouflage and a mask and was carrying an AR-15 rifle.

Witnesses say shooter was dressed in camouflage and possible body armor with a mask, carried an AK-15. Info via live reports on @foxnews

MORE: At least four, as many as seven injured in #ClackamasShooting. Of 2 dead, one may be shooter, according to dispatch.

KATU news is reporting that a police officer has said "The shooter is down." #Clackamasshooting

Heartbreaking photo from outside the Clackamas mall, via @JoelIwanagaKOIN: pic.twitter.com/fA5rU7ZF

Local media are reporting that the suspected shooter has been “neutralized.”

Sheriff: "No longer active shooting, shooter has been neutralized, wounded are being treated." #ClackamasShooting

Twitchy will update with more information as it becomes available.

New reports suggest that the shooter might have been a teenager.

Update on #Breakingnews…Officers say shooter in Portland mall was possibly a teen, wearing a mask, dressed in cammo. #10news

Three are now reported dead, including the shooter.

BREAKING: Three people are dead, including gunman, after man open fires in a mall near Portland, OR. Still 100 police inside mall.

At a press conference, police confirmed that the shooter died of a self-inflicted gunshot wound.