Jimmy Carter and Al Gore each have one. Barack Obama was awarded his in October 2009, after only eight months in office, in part for his outreach to “normalize relations” with the Muslim world. (They love us now, right?) Now these previous recipients share the honor of winning the Nobel Peace Prize with the 500 million citizens who make up the European Union.

If the award reminds you of that time “you” won Time magazine’s Person of the Year award, you’re not alone.

Having won Time’s Person of the Year back in 2006, I’m surprised but delighted to accept this Nobel peace prize 6 years later

Congrats to "all 500 million Europeans" for winning Nobel Peace Prize, awarded by Europeans. You guys got a good continent going there.

The announcement, made today, was met with widespread snark. Expectations were already low (see list of winners above), but the EU?

Europe awards Europe the Nobel Peace Prize for being Europe.

Giving the Nobel peace prize to the EU is like admitting that our world is so messed up that we've run out of options.

People say Nobel committee jumped the shark. I say no. Still time to award it to themselves.

As a facebook friend put it: "This just in: White Race wins Nobel Peace Prize."

Heard at the Nobel Peace Prize dinner … Greece: "Hey guys, I forgot my wallet. Can someone spot me? Germany?"

So the Nobel Peace Prize is a parting gift?

nobel peace prize goes to …? A union of countries in which half are bankrupt, a third are third world and the others no one cares about?

Remember when the Nobel Peace Prize still had a little bit of credibility?

We don’t remember exactly, but it was quite a while ago. What year did Yasser Arafat win? That doesn’t matter. What’s going on today is what matters.

Here's what our European Union page looked like on the day the EU wins the Nobel Peace Prize: ironic? pic.twitter.com/M9pugfuw 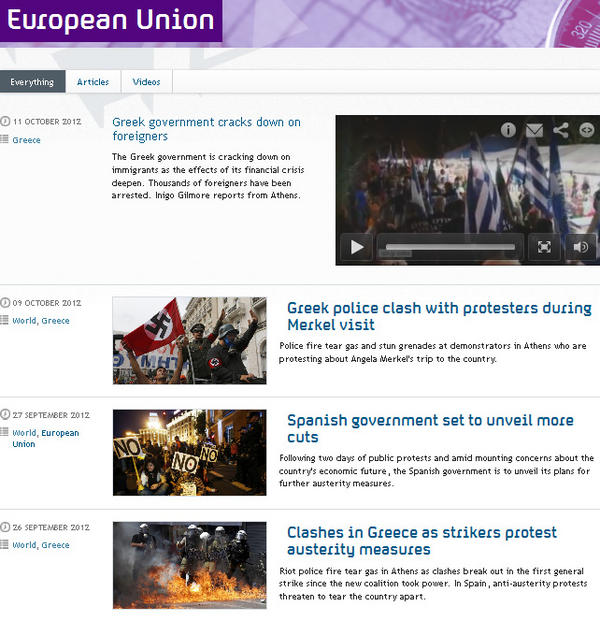 Take heart if you’re not a member of the EU. Maybe next year will be the year for these aspirants.

Next year, the Nobel peace prize will be awarded to planet earth for not self-imploding #NobelPeacePrize

BREAKING – Runner-up for Nobel Peace Prize was Antarctica, "a continent that has always been at peace."

I think the guy that made Gangnam style should get the #nobel peace prize. He united the whole world.

What’s the chance of the United States getting a shout-out from the award ceremony?

If the Nobel committee was being honest, then the U.S. Strategic Air Command would have been the co-winners of the Peace Prize with the EU.