Today is the 12th anniversary of the terrorist suicide bombing of the USS Cole by al-Qaida, which took the lives of 17 U.S. sailors in Yemen. While Twitter has been lit up for weeks as citizens attempt to untangle the truth about the Sept. 11 terrorist attack which killed four Americans in Libya, several paused to remember those who died in 2000.

12 years ago today made me who I am today. My fallen shipmates will live with me forever. Our dream is near! #Neverforget #RememberTheCole 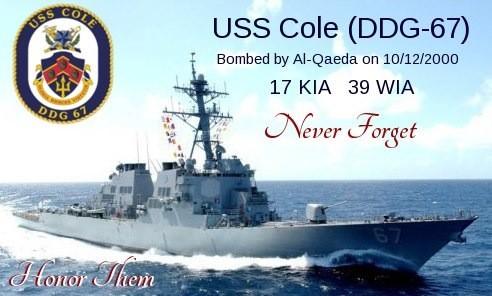 thinking of the families and crewmates of the USS Cole. never forget #RememberTheCole please get this trending on anniversary of attack

Today is the anniversary of the USS Cole attack, 10-12-2000. Support & pray for all in harm's way. #rememberthecole

#rememberthecole. And the brave men and women who were injured or killed that day.

Remembering the sacrifice of those who lost their lives on the USS Cole 12 years ago today. #RememberTheCole

Twelve years ago today the USS Cole was attacked in Yemen killing 17 sailors. RIP brave men and women. I will #neverforget. #RememberTheCole

As a Navy Brat I #RememberTheCole and the sacrifices our servicemen and women make everyday to ensure our freedom. #neverforget

In her syndicated column, Michelle Malkin chronicles the game of political football which has delayed justice for the families of the fallen.

The current Democratic White House has not only delayed and denied justice to the victims and their families. President Obama’s foot-dragging administration, crawling with pro-terrorist lawyers, effectively undermines our nation’s ability to detain, contain and destroy jihad threats from within and without.

Suspected Cole bombing suspect and former Persian Gulf Operations Chief for al-Qaida Abd al-Rahim al-Nashiri has been in U.S. custody since 2002 and at Gitmo since 2006. In February 2009, Obama met with Cole families and promised them justice. Then, he stabbed them in the back by ordering the (Social) Justice Department to abandon the death penalty case assembled against the al-Qaida mastermind under the Bush administration.

#RememberTheCole Barry step away from the teleprompter & show a little respect.