Partisan remarks from the supposedly objective lapdog media? Say it ain’t so!

“Real journalist” Pedro da Costa, who writes for Reuters, helpfully explained to his Twitter followers yesterday that Mitt Romney’s release of his 2011 tax return was a “true sign of desperation.” After several followers called da Costa on his editorializing the tweet disappeared, but not before it was screen-capped.

This is what an Obama lapdog "journalist" looks like from Reuters https://t.co/u76wjloT @pdacosta #tcot #p2 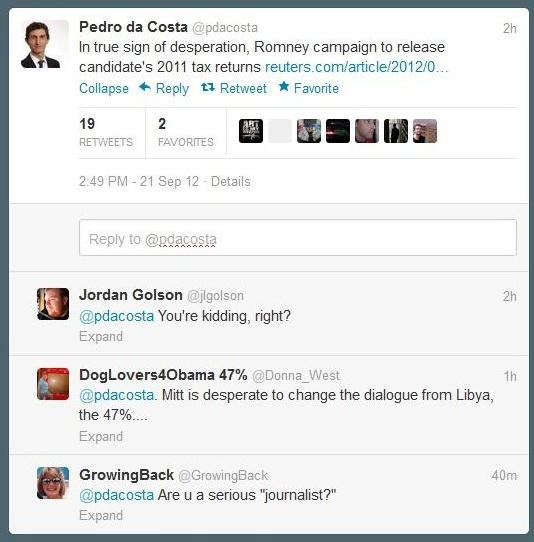 If anything could be described objectively as a true sign of desperation, it would be Sen. Harry Reid crowing on the Senate floor just two days earlier, “For all we know, Mitt Romney could be one of those who have paid no federal income taxes” — an idea planted in Reid’s head by an anonymous but “credible” source.

Is it possible we could have our news without the desperate lapdog spin?

@pdacosta are you really that clueless about when they were available, or are you just very biased?

@pdacosta I believe he said months ago he would release the final 2011 records when complete. Careful there. Your bias is too obvious.

@pdacosta "True sign of desperation"? If he was truly desperate, he wouldn't release anything. Now it's in the news cycle. Check yourself.

@pdacosta Seriously,this is what the MSM tells itself?? Here's a news story: Pres lied for over a week about a planned terrorist attack.

@pdacosta where did u get your journalism degree in a cracker jack box like your lame media colleagues? Do u give 30% to charity like Mitt?

Memory hole? Not with Twitchy around. Congratulations Pedro da Costa on earning the prestigious “Deleted Tweet of the Day” award.