From the piece linked above:

According to a spokeswoman for Moms Demand Action (MDA), the moms were inside the Blue Mesa Grill when members of Open Carry Texas (OCT) — an open carry advocacy group — “pull[ed] up in the parking lot and start[ed] getting guns out of their trunks.” The group then waited in the parking lot for the four MDA members to come out. The spokeswoman said that the restaurant manager did not want to call 911, for fear of “inciting a riot” and waited for the gun advocates to leave. The group moved to a nearby Hooters after approximately two hours.

Here’s the photo from that piece:

Looks like there might be some intimidation going on, right? National Review’s Charles C.W. Cooke thought so at first:

This strikes me as being not only unacceptable behavior but also illegal. Anyone have a counter-argument? http://t.co/ptuYsGjCr0

But as it turns out, ThinkProgress wasn’t presenting the full picture:

@charlescwcooke Yes, unwise. But the pic in that article is not what it seems. https://t.co/e91sP7WCd4 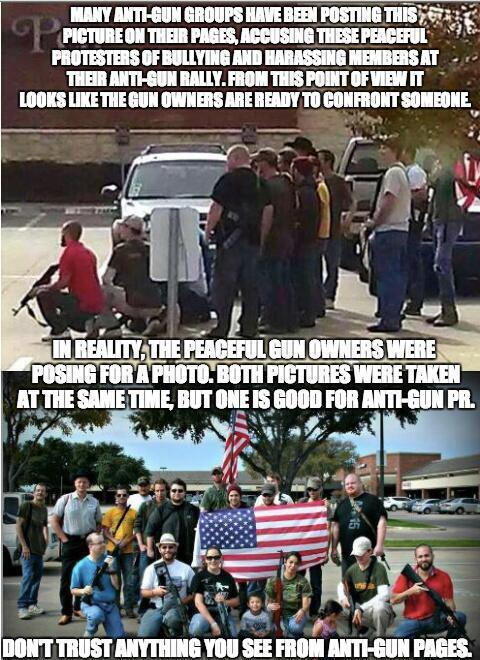 Oh wow. MT @charlescwcooke: Aha. MT @linoge_wotc: It turns out that picture is the other side of this picture: http://t.co/tYv2g8Q6TH

Show of hands: Who’s shocked that ThinkProgress would play fast and loose with context and deceive its readers?

Why can’t @thinkprogress ever write up anything without lying and spinning? Seriously. http://t.co/OyHsUFwtjG

For what it’s worth, I don’t like the Open Carry Texas's tactics, which I think are counter-productive. But that doesn’t make them illegal.

If you’re going to make a case that this was illegal, you have to do it on grounds of intimidation or brandishing. http://t.co/OyHsUFwtjG

But no. Let’s lie about the laws in Texas, and publish a deliberately misleading photograph: http://t.co/OyHsUFwtjG

@charlescwcooke Just read the ThinkProgress comments, they don't care what the reality of the pic was.

@charlescwcooke It's not about getting caught. They've already established the meme among people who want to believe. All that matters.

Exactly. And ultimately, TP’s credibility doesn’t seem to be an issue for some pretty important people:

This is just the sort of thing we’ve come to expect from these hacks.

@charlescwcooke @thinkprogress ideology trumps truth when you are building a better society.

Will an apology from Vanity Fair contributing editor Kurt Eichenwald be forthcoming?

Four moms from a gun control group went to lunch. So 40 jerks armed with assault rifles gathered outside to scare them. Bullies AND cowards.