In Egypt, reports of widespread attacks on churches around the country's response to break up of the Islamist sit-in, police fail to protect

Deadly violence erupted in Egypt again on Wednesday as forces attempted to clear pro-Morsi sit-ins from Rabaa and Nahda squares in Cairo.

Reports of civilian deaths range from 10 to more than 300.

Corridors at Rabaa Mosque hospital filled with dead and dying. As one body is stretchered to morgue, others brought in

Outside of Cairo, churches and businesses owned by Copts were torched and vandalized.

According to @phil0oo, a literal pogrom is happening in Sohag. Main church and many Christian shops set ablaze.

Maspero Youth Union, a Coptic rights group, said the Muslim Brotherhood was “waging a war of retaliation” against Christians in Egypt. AFP reports that three churches in central Egypt were set ablaze, but Twitter reports indicate there may be more. 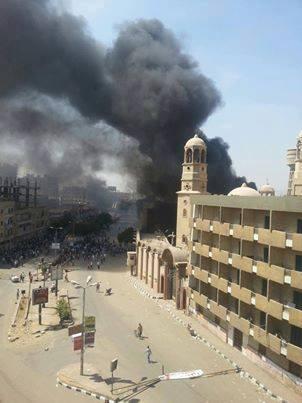 The evangelical church after being burnt by Morsi supporters in #Minya governorate in upper #Egypt pic.twitter.com/2yGzYGf7BC

A Muslim. RT @maifizzle: I'll be wearing this all day today as a stand against all this idiotic church burning. pic.twitter.com/rxrnkJJRxc

I Photo of the day I #Egypt barricade for the defense of the church pic.twitter.com/aPduhWQtue

Businesses run by Coptic Christians were reportedly targeted as well.

@whitehouse Any comment on #MB an #Morsi supporters burning (so far) six churches across #Egypt in their "peaceful" west-approved protests?

I'm losing count of churches and Coptic houses that are being attacked nationwide.

RT@EIPRConfirmed sectarian attacks 2 churches still on fire are the Virgin & Bishop Abram Church of Dilga, Menya and the Bishopric of Sohag