This guy, out of all protesters, taunts NRA convention attendees by saying ‘you need a gun because…

Cheers at the Boston Marathon have turned to screams.

There is blood all over the sidewalk. pic.twitter.com/u7PjG119VF

Wow. A picture of the actual fireball. This is BAD news. Hold on to your seats people. http://t.co/eA6UYtRle4

Finish line volunteers told to run. Describe fear "like 9/11 or the tsunami."

Our prayers go out to Boston and all those affected by this horrific event.

RT @DennisTodisco Pray for Boston. MT @907RAVFM: Explosion at the Boston Marathon. #bostonmarathon Media locked down at nearby hotel.

Prayers to those in Boston. My the Lord protect them.

My prayers are with the people and city of Boston.

Praying for everyone in Boston.

Our prayers are with those injured and the first responders at the Boston Marathon.

Tagg Romney was near the explosion site. RT @tromney: We r OK. Left Fenway in a cab a few mins before the explosion. Prayers w the victims.

If you're a praying person, now's the time. People at the Boston Marathon are seriously injured.

We will continue to monitor this situation and update with developments.

More news and photos from the scene:

MT @KDRV Multiple explosions being reported near the finish line of the #BostonMarathon. Pic from online live feed: pic.twitter.com/JqUf597kdI

MT @SalenaZitoTrib – @ASE PHOTO of 1 of explosions on finish line at #BostonMarathon – at least 12 injured pic.twitter.com/ptoZB8VybU

Continue to be pushed farther back. Horrified faces of ppl coming from scene #bostonmarathon #WBZ pic.twitter.com/3mlFCvoZaI

#Fox25 reporting that people have lost arms, limbs, casualties in double-bombing at #BostonMarathon at Copley – http://t.co/7VKt5bpiMA

The pictures are horrific. Blood everywhere. Someone also captured the second explosion going off. Heard reports of dismemberment. #pray

We were so close it was scary. Felt the force of the explosion. People were fleeing and victims were scattered. pic.twitter.com/3WSlXTFkqY

"People are passing us in wheelchairs, who are being pushed, who are bleeding, who are missing limbs. There two huge explosions." – WBZ

This Vine shows the blast itself: https://t.co/7f2YSq8h7V #BostonMarathon

At least 3 people killed after two explosions near the finish line of the Boston Marathon, a law enforcement source says.

Bratton on @nbc, citing Boston police sources: Two explosions, as many as 50 injured.

"There were bloody faces. Parents holding their children as they were being wheeled away….cuts, broke bones, lost limbs." WCVB

According to the Boston Police, two people have been killed:

More on what may have caused the explosions: 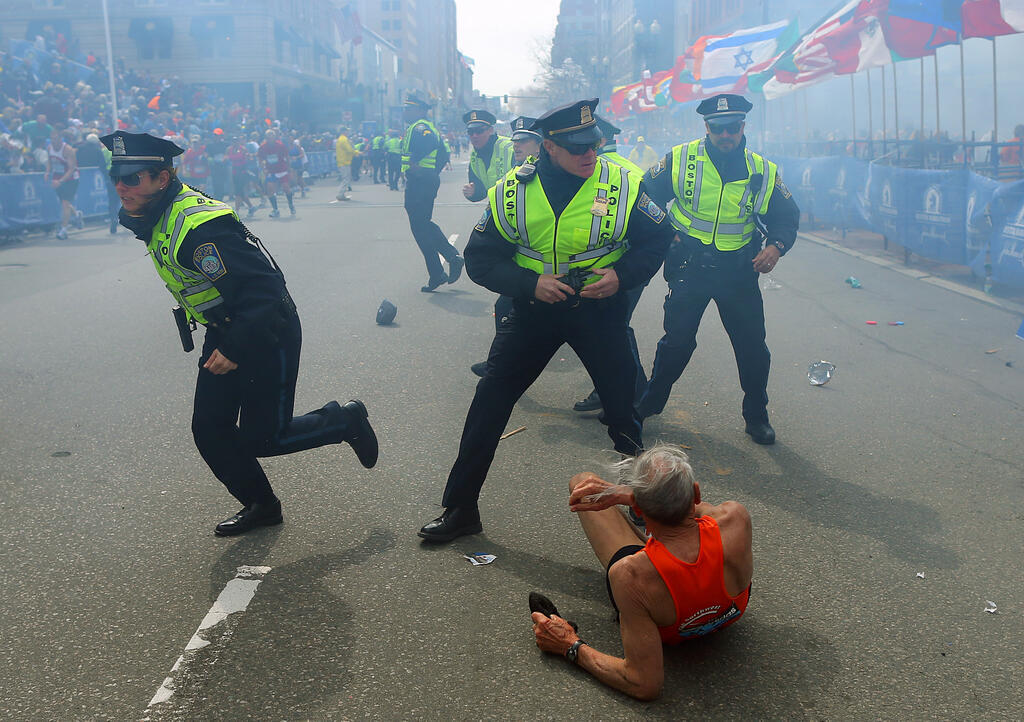 Some outlets are reporting that a suspect is in police custody.

NBC News: A law enforcement official says one of the two people killed in today's explosions was eight years told.

This guy, out of all protesters, taunts NRA convention attendees by saying ‘you need a gun because you’re weak’