Oh, dear. James Taylor is trending on Twitter this afternoon, after his performance at President Obama’s Inauguration.

James Taylor performs "America the Beautiful." He's a favorite of Pres Obama and ardent campaigner for him.

James Taylor is trending. Why the sudden interest. Even my lunch wasn't worth discussing today

And, not in the good way, for some. “Your smiling face”? More like your giggling madly face.

But, then again, he also liked the Inaugural poem. No, really.

Rep. Cantor liked Taylor’s performance. As Twitchy reported, he was not a fan of the poem, though. 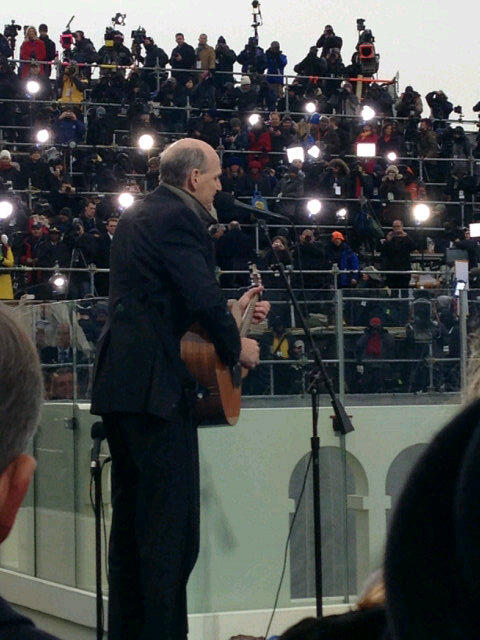 Some snarky Twitter users bring the funny after Taylor’s performance.

James Taylor, everyone. Get the tear blankets out.

James Taylor is the prefect guy to play at this farce. Cliched, cheesey, from the past, sucky. He perfectly sums up progressivism. #Caring

Others? Not so much. They just aren’t fans and make no bones about it.

James Taylor sucks if he was on American Idol, he would not get a gold ticket to Hollywood

I don't care what anyone says, James Taylor sucks

Why couldnt the have someone else perform at the 2013 inauguration… James Taylor sucks!

We will never be united as a nation until we all agree that James Taylor sucks.

James Taylor is probably the worst person ever to sing this song. He sucks.

Of course, out came the oh-so-post-racial remarks, just like with Kelly Clarkson’s performance.

We have a black president in his second term and we still have to listen to James Taylor???

Mommy X just said that James Taylor was there to sing for the white people. *tears*

Ok, white people. James Taylor is on. This is your moment. Soak it up.

RT @armlessphelan: James Taylor is how you remember Obama is half white.

With both James Taylor and Kelly Clarkson, it's obvious Obama's going for the "white people with no taste" vote.

The choices of Kelly Clarkson & James Taylor seem so white on this MLK day inauguration that it's like a summit for albinos. #inaug2013