‘In what world is this journalism?’ NYT helpfully tells woke activists which companies and…

DOJ: No charges against unnamed officer who shot Ashli Babbitt inside U.S. Capitol on Jan. 6

UN Amb. Linda Thomas-Greenfield: To join the Human Rights Council, America has to acknowledge to the…

‘I’m in the wrong line of work’: Daily Caller’s latest on BLM co-founder…

Senator Mitch McConnell is a hard person to laugh at. Love him or hate him, he’s established himself as one of the more bland personalities on Capitol Hill. Yet today, it was proved that even the very-vanilla McConnell could find himself at the center of an Internet meme. After being caught staring sternly in an inauguration crowd, the Gentleman from Kentucky looked ominously like someone involved in a dastardly plot. Of course there’s a meme for such images, and this one quickly spread among the punditry.

@dorseyshaw @buzzfeedandrew The look on Mitch McConnell's face in the middle of the screen is priceless!

For those unfamiliar with the “soon” meme, it’s defined by KnowYourMeme.com as “an image macro series that typically features a creepy looking figure peering out of a dark enclosed space with the word ‘soon’ overlaid. It is meant to imply that the figure is planning some kind of devious scheme.”

Yes, we actually looked that up — so you don’t have to.

Here are some other famous images associated with the meme. McConnell is in good company. 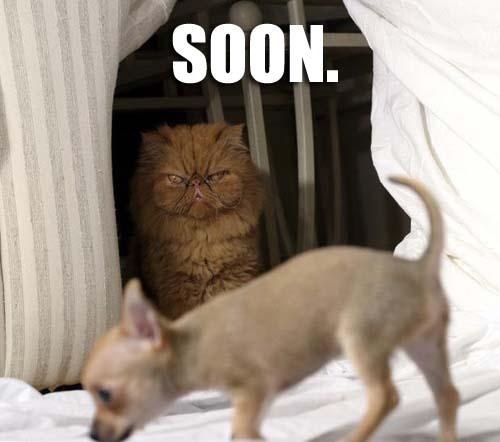 Yeah. That honey bear definitely reminds us of Mitch.

‘In what world is this journalism?’ NYT helpfully tells woke activists which companies and CEOs to target for boycotts and threats over ‘restrictive new voting laws’