“WOW GOPROUD FINALLY CAME OUT IN SUPPORT OF GAY MARRIAGE. SO PROGRESSIVE. SO PROUD OF YOU. SUCK MY DICK,” he tweeted, along with a link to a BuzzFeed post about GOProud’s adoption of a pro-gay marriage resolution. The resolution supports the right of each state to define marriage and calls for decisions to be made via referenda or legislation rather than judicial activism. 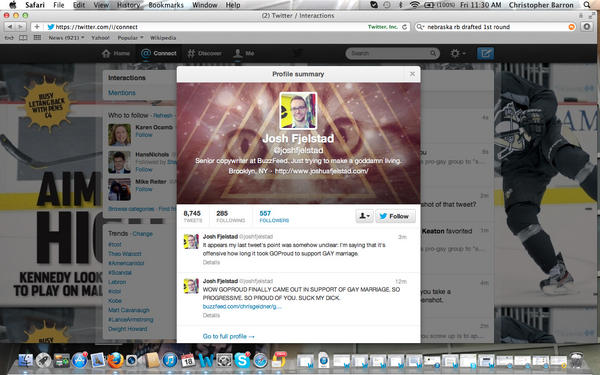 Great argument, Josh! Changing hearts and minds, one “suck my d*ck” at a time.

@adamsbaldwin indeed, the tolerant left tolerates everything and everyone except those that disagree @GayPatriot

He followed up with another since-deleted tweet: “It appears my last tweet’s point was somehow unclear: I’m saying that it’s offensive how long it took GOProud to support GAY marriage.”

As for Chris Barron, he’ll pass:

If a senior copywriter at FOX News had told a pro-gay group to "suck his dick" the left would demand he was fired https://t.co/pw6MiPnJ

And a good question from GayPatriot:

GOProud’s Executive Director Jimmy LaSalvia told Ali Akbar, “It is not an appropriate tweet from someone who is a senior copy writer at BuzzFeed. I was under the impression that BuzzFeed was a news outlet.”

Let's admit it… BuzzFeed is just a liberal bloggggg. They've been avoiding the Talking Points Memo label, but it's coming.

BuzzFeed ‘reporter’: Romney helping a dying boy sure is icky and morbid; The decent set him straight