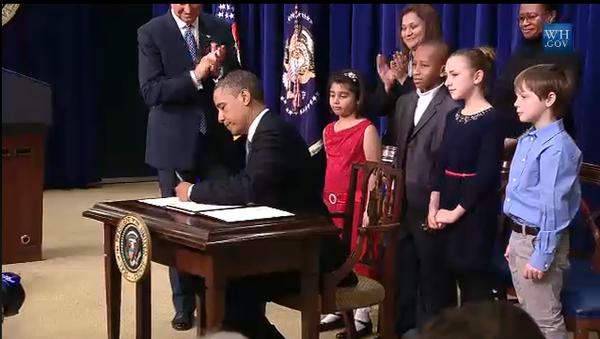 For the (use of) Children™:

@TheObamaDiary: Pres Barack Obama with 11-yr-old Julia Stokes who wrote a letter to him asking for gun control pic.twitter.com/eOuvHSxH #fb

As we reported earlier, President Obama planned to shamefully use children as props, playing on emotions, during his announcement of his gun control measures. And, that he did. In all its disgraceful glory.

"If [we] stand up & say 'enough, we care too much about our children to allow this continue', then change will come." pic.twitter.com/9YAuITRm

Obama hugging children after he signed the orders: adorable. pic.twitter.com/f2LKOvt9

Adorable? The innocent children being used as political props are adorable. But the president’s shameless and shameful actions? Not so much.

'Thank you, Mr President' – with children who wrote him letters about gun control after Sandy Hook. pic.twitter.com/LJBVekce

No one at the White House. RT @TheRickWilson: No one sees this is a moment of obscene political theater?

RT @jimgeraghty: Clearly, we need a seven day waiting period before a politician can use a child in a photo op.

Maybe Obama will teach his child-props to sing a little song about how the NRA mentioning his kids is "repugnant and cowardly."

Nice of Obama to allow taxpayers to fly his child props & the parents who dictated letters to them to the White House today to be exploited.

@caroljsroth thought for a second Obama was signing an apology letter to kids for putting them each in $50,000 debt pic.twitter.com/CZTKvkm2 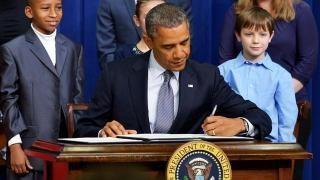 Pres Obama quotes from the handwritten letters about gun violence he received from the 4 children on stage with him.

It does seem a bit farfetched, huh. RT @missADelgado: Really? A kid used the phrase "I could not bear the thought of …" ??

"I love my country, and I want everybody to be happy and safe." – Obama | Um, banning guns won't do that. #tcot #obamapresser

But, #forthechildren though. RT @guypbenson: Each child on that stage is saddled with a $52,000 share of the national debt.

Obama exploited children as props, and failed to mention that his party denies the right to life to millions of children EVERY year.

That’s right. As Twitchy reported earlier, he added epic hypocrisy to that by invoking the right to life. Except for when it comes to abortion, natch.

Of course, using children is nothing new to Democrats.

The president’s Twitter feed also tweeted something else that was staggering in its lack of self-awareness.

"Along with our freedom to live our lives as we will comes an obligation to allow others to do the same." —President Obama

For President Obama, the freedom to be shameful and disgraceful is paramount. Everybody else? Whatever. He knows what should be allowed or not. If, of course, he thinks you deserve the right to life. Or freedom.