So Manti Te'o was essentially showing people a picture of "Man-Hands" and claiming it was his dead girlfriend? Really?

Well, yes, that’s pretty much it. Deadspin.com has the (much longer but fascinating) account, but in short, University of Notre Dame linebacker Manti Te’o’s girlfriend, Lennay Kekua, didn’t die tragically at 22 because she was never born in the first place. As writers Timothy Burke and Jack Dickey report:

Outside of a few Twitter and Instagram accounts, there’s no online evidence that Lennay Kekua ever existed.

The photographs identified as Kekua — in online tributes and on TV news reports — are pictures from the social-media accounts of a 22-year-old California woman who is not named Lennay Kekua. She is not a Stanford graduate; she has not been in a severe car accident; and she does not have leukemia. And she has never met Manti Te’o.

That so many people were touched by the inspirational story of triumph over tragic loss makes the revelation of the hoax even that much more shocking. Te’o did indeed lose his grandmother last September, but the death of his beloved “Lennay Kekua” of cancer months after a serious car accident was so sad it was reported by ESPN, Sports Illustrated and other media outlets, accompanied by a photo snagged from a stranger’s Facebook account.

Wait somebody help me out. Manti T'eo was lying about his dead girlfriend the entire time? This can't be real life!

It is real life. Once the shock wore off, though, the idea of someone creating a pretend girlfriend on the Internet didn’t seem all that far-fetched. Pathetic, but plausible.

Manti Te'o got Catfished, no?

The greatest trick the devil ever pulled was convincing the world that Manti Te'o had a living girlfriend.

Stay strong, Manti. No one believes that I'm dating Kate Upton, Halle Berry and that wife from "Homeland," but I totally am.

Manti Te'o is a winner. Even his fake dead girlfriend went to Stanford. My imaginary friend went to community college and banged my sister

It almost sounds like an “X Files” episode, and some wonder if the tragic story of Lennay Kekua had such legs because people wanted to believe.

@andylevy @deadspin what does this say about fact checking and journalism in today's society?

Let's not forget that Sports Illustrated looks pretty bad in all this, too. They benefitted quite a bit from Manti's story.

50 min since this published, and it's already been tweeted almost 9k times. Fun times ahead for Manti's PR people http://t.co/3TxgDTk9

Notre Dame’s spokesperson is having a busy day, too. The school’s Dennis Brown issued a statement on Facebook claiming that Te’o himself was the victim of a hoax.

On Dec. 26, Notre Dame coaches were informed by Manti Te’o and his parents that Manti had been the victim of what appears to be a hoax in which someone using the fictitious name Lennay Kekua apparently ingratiated herself with Manti and then conspired with others to lead him to believe she had tragically died of leukemia. The University immediately initiated an investigation to assist Manti and his family in discovering the motive for and nature of this hoax. While the proper authorities will continue to investigate this troubling matter, this appears to be, at a minimum, a sad and very cruel deception to entertain its perpetrators.

Sports Illustrated writer Pete Thamel is asking the questions that have everyone scratching their heads.

ND releases statement that says Te'o was a victim of a hoax: "a sad and very cruel deception to entertain its perpetrators."

ND: "Lennay Kekua apparently ingratiated herself with Manti and then conspired with others to lead him to believe she had tragically died.

The big question here is whether Te'o was involved or not. Notre Dame is staking a loud claim that he got duped and had no involvement.

How could Manti be the victim of a hoax if he told newspapers that his gf visited him in Hawaii and that he met her after a football game?

Notre Dame is conducting an investigation into the "hoax" on Manti Teo? While they're at it, maybe they can help OJ find the real killers

So, to be straight, Manti Te'o was the victim of "a hoax" that he and the school then bought into and used to their advantage?

Update: The plot thickens — how could it not? Deadspin posted its story just over an hour ago. Notre Dame responded that coaches were approached about the hoax Dec. 26. But was someone on to the story as early as Dec. 3?

An account currently suspended tweeted that the Manti Te'o – Lennay Kekua story was a hoax — in December. pic.twitter.com/JWrCCgD2 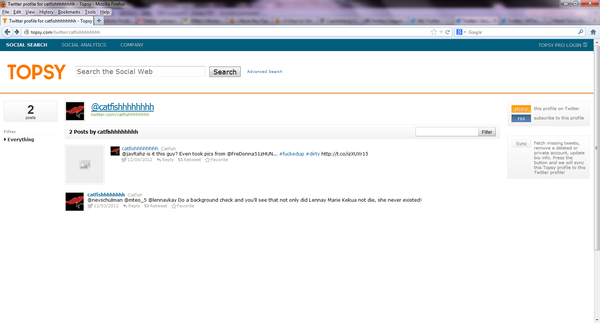 I don't know what this Catfish reference is and I'm pretty sure I do not want to know.

You remember that movie, Erick. Universal Pictures said it was “a riveting story of love, deception and grace within a labyrinth of online intrigue.”

Oh I do remember that Catfish movie. Never saw it though.

Te’o has issued a statement, calling himself the victim of a sick joke.

This is incredibly embarrassing to talk about, but over an extended period of time, I developed an emotional relationship with a woman I met online. We maintained what I thought to be an authentic relationship by communicating frequently online and on the phone, and I grew to care deeply about her.

To realize that I was the victim of what was apparently someone’s sick joke and constant lies was, and is, painful and humiliating.

Who knew that Lennay Kekua didn’t exist, and when did they know it? The Big Lead is reporting that ESPN has been sitting on the story for 10 days.

Confirmed from 2 sources: ESPN has known about the Manti Te'o story for 10 days. Had been reporting it, but could not confirm.

.@TheBigLead @WillMcAvoyACN but they had no problem reporting about the fake girlfriend’s death w/o confirming she existed

Hmm. Back in September, just days after Kekua’s “death,” Te’o asked her (via tweet) to say hello to other loved ones in the afterlife.