As Twitchy reported, New York’s state senate late last night voted to pass a set of sweeping new gun regulations that one senator called “the toughest gun control package in the nation.” Wasting no time, today the New York State Assembly approved the package by a 104-43 vote and immediately passed it along to Gov. Andrew Cuomo for his signature.

The New York State Assembly, after more than four hours of debate, approves new gun laws by a vote of 104 to 43. 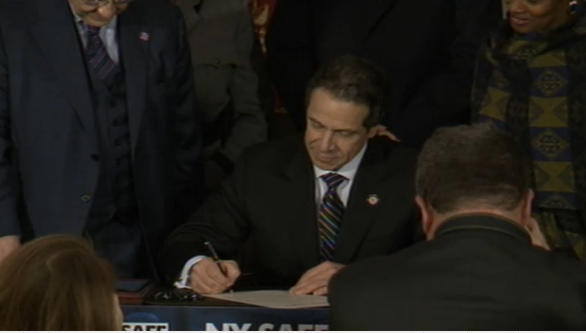 @NYGovCuomo: "this is not about banning guns, I am a gun owner"

I didn't know that @NYGovCuomo owned a gun. Apparently he does. That gives him some sort of street cred. #NYSafe

The legislation expands the state’s assault weapons ban and prohibits semiautomatic pistols and rifles “with detachable magazines and one military-style feature, as well as semiautomatic shotguns with one military-style feature.” Citizens who already own guns prohibited by the new law will be required to register them with the state. The legislation also includes a so-called “Journal News” clause allowing citizens to opt out of having their status as gun permit holders publicized.

Cuomo signed the bill at an afternoon ceremony attended by several mayors from across the state, including New York City Mayor Michael Bloomberg.

#Cuomo: "This was an extraordinary first day of the legislative session." #guns

"Common sense can win," Cuomo says. "You can overpower the extremists with intelligence and with reason."

Thanks to @NYGovCuomo, @SenatorSkelos, @JeffKleinNY and Speaker Silver for helping to keep guns away from criminals and make New York safer

No debate, passed and signed in < 24 hrs. RT: @feliciasonmez: RT @thomaskaplan: .@NYGovCuomo has signed the gun control bill into law.

Critics of the package weren’t so impressed with the speed of its passage.

Cuomo negotiated bill behind closed doors with no opportunity 4 contents 2b vetted by public or even senators who first voted on the bill.

#NYGunControlLaw– please make sure all of the criminals in New York read this new legislation. They won't want to break the rules. #Cuomo

@NYGovCuomo awesome now no criminal will ever have a gun.